The Pier, Walton-on-the-Naze, 1900
Reproduced courtesy of The Francis Frith Collection.

WALTON-LE-SOKEN, or WALTON ON THE NAZE, is a small, but handsome and improving town, romantically situated of the cliffs next to the sea. It has, during the present century, obtained considerable celebrity as a favourite bathing place. It is 18 miles East by South of Colchester, 9 miles South of Harwich (by water), and 13 miles South East of Manningtree.

Its parishes, which had only 721 inhabitants in 1841, has now about 900, and comprises 2600 acres, including marshes and sea beach. Extending northward from the town, it forms the promontory called the NAZE, which is more than three miles long, and about one broad, bounded on three sides by the ocean, which is continually making inroads among the cliffs, in which are found many interesting antediluvian remains.

On this promontory is a brick tower, 80ft. high, built by the Corporation of Trinity House, London, for the direction of vessels passing by, or entering, the harbour of Harwich. Its northern extremity is called Walton-stone, and Goldmans'-gap, and on its banks eringo-root, and samphire grow abundantly. The elevated site of the tower affords an expansive view over the sea, and along the coast to Harwich, Landguard Fort, etc., but from the summit of this lofty building, the prospect seems illimitable.

On the beach are gathered great quantities of copperas. There was formerly a martello tower on each side of the town, but one has been taken down, and the other is now occupied by the coast-guard as a signal station.

Walton has a fair on the second of July, and some business is done by the neighbouring farmers, when they meet at the Portobello Hotel.

It is one of the three parishes forming the liberty and peculiar jurisdiction called The Soken. It anciently extended much further out to sea, and ruins have been discovered, on a shoal called the West Rocks, five miles from the shore. The ocean still gains much on the land, though large sums have been expended in erecting sea walls, break waters, etc. especially under an Act passed in the 4th and 5th years of the reign of her present Majesty, for improving the town and parish; and the powers of which are about to be extended by another Act of Parliament.

About half an acre of land being washed down near the Terrace, during a high tide on the 5th April, 1848. Another high tide on Dec. 17th, 1846, overflowed a wide extent of land, and destroyed about £2000 worth of property belonging to Mr. J.W. Hicks, an extensive farmer, of Walton Hall. The Terrace wall was washed down in the summer of 1839, and a new one was built in 1840. 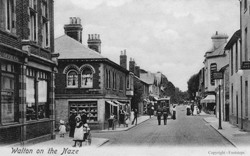 Kent's Family Hotel, at the Crescent, erected in 1832, is a large and handsome building, on the highest part of the cliff, about 150ft. from the beach; and that part of the cliff which was in front of it has been thrown down on an inclined plane, extended to the beach, where an elegant wooden jetty was erected in 1830 by subscription, at the cost of £1000. This jetty or pier extends 330ft. into the sea, and its platform is an agreeable promenade, defended on each side by neat cast iron rails, and having numerous seats, and at the end a landing place, at which the Ipswich and London Steam Packets call daily, during the bathing season.

The splendid terrace, comprising a row of six large and elegant houses, fronting the vast expanse of the ocean, on which steam and sailing vessels are always on view, was built about ten years ago, and is now rented by Mr. J.H. Farrand, a respectable member of the Society of Friends, who lets the houses or apartments, handsomely furnished, to the higher classes of visitors, with every required accommodation, including a handsome Bath House, fitted up with cold, warm, shower, and sitz baths; and such of the visitors as have been accustomed to the hydropathic treatment may continue it here, and with the addition of a seaside residence, and at half the usual expense.

The promenade and carriage drive in front of the Terrace is 1120 feet in length, and from it is seen the revolving light at Harwich, and a wide extent of ocean as far as the eye can reach.

Portobello Hotel is another large, comfortable, and well-conducted establishment for the accommodation of visitors, as is also the Bath Hotel; and many of the inhabitants let furnished lodgings, suitable for all classes of visitors. The beautiful sea beach has a fine smooth sand, affording a delightful promenade several miles in extent; and having a gradual descent, the bathing machines may be safely used at various states of the tide.

The wind mill was erected in 1846, by Mr. John Archer, who in 1848 built a small sloop here for carrying flour, copperas, etc. to London. The Terrace belongs chiefly to John Warner, Esq., and in the Crescent are several good family houses belonging to J.W. Cross, and other proprietors.

The Executors of the late B. Chapman, hold the manorial rights of the three parishes forming the liberty of The Soken, but the soil in this parish belongs to Miss Powell, Philip Bennett Esq., C. Grant, Esq., Joseph Warde, Esq. and several small owners. Walton Hall, an ancient farm house, which stands on the promontory near the lofty tower, built as a sea-mark, belongs to Miss Powell. 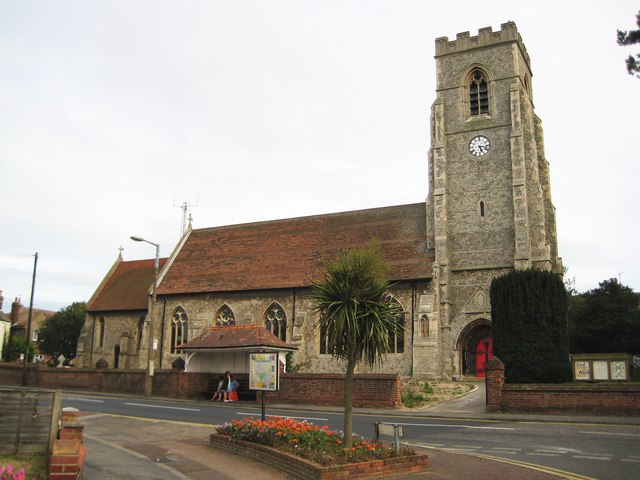 All Saints Church Church, Walton-on-the-Naze.
© Copyright Nigel Cox contributor to the Geograph Project and licensed for reuse under this Creative Commons Licence

In 1739, about 89A. of land here was purchased for the augmentation of the rectory of Holy Trining, Colchester; but about 65A. of it has been carried away by the sea. An estate, washed away some centuries ago, belonged to a prebendal stall in St. Paul's Cathedral, London, now called 'Prebenda Consumpta pere Mare'.

The old parish church (All Saints), after remaining a considerable time in ruins, was washed away in 1796, and the sea has now advanced several hundred feet beyond the place where it stood. A small new Church was erected in 1804, and it was enlarged, and nearly all rebuilt in 1832 and 1835, chiefly by subscriptions, to meet the wants of the growing population, and increasing number of visitors. It is a plain red brick building, with a square tower, and about 600 sittings. The vicarage is consolidated with those of Kirby and Thorpe-le-Soken in the patronage and incumbency of the Rev. Wm. Burgess, B.D.

The Vicarage House is a newly erected building for the residence of the curate. The tithes here were commuted in 1841, the vicarial for £133, and the impropriate for £270 per annum. The Infant and Sunday School was built in 1838, and is attended by about 70 children, and supported by subscription. Here is a small Independent Chapel, built in 1836 at the cost of £300.

The Poor Land comprises 10A., called Spendell's, given by John Sadler in 1563, and Thos. Goulding in 1582, and now let for about £17; and 25A. called Stokes, given by unknown donors, and now let for about £40 a year. The rents are partly in small weekly sums to the aged poor, and partly in coals on New-Year's day. The poor parishioners of Walton have also a yearly rent of £2 out of Pulpit Field, purchased with £20 left by Charles Stevenson in 1613; and £2 in 1613; and £2 yearly from an acre of land, which adjoins the Pulpit Field, and was given by an unknown donor in the reign of Queen Elizabeth.

Four ancient Almshouses fell down about 1843, and in their stead four cottages were built, and gardens added to them from the waste. These cottages were built out of savings from the income of the poor's land. Three are occupied rent free, and the other is let for £3.18s. In the reign of Elizabeth, the parish had a house and two shops near the old church, but these were washed away by the sea in 1820.

Back to History of Walton-on-the-Naze 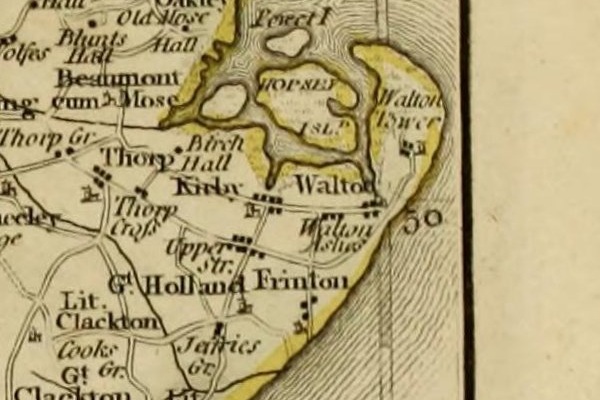 Walton on the Naze - Cary's New and Correct English Atlas, 1798 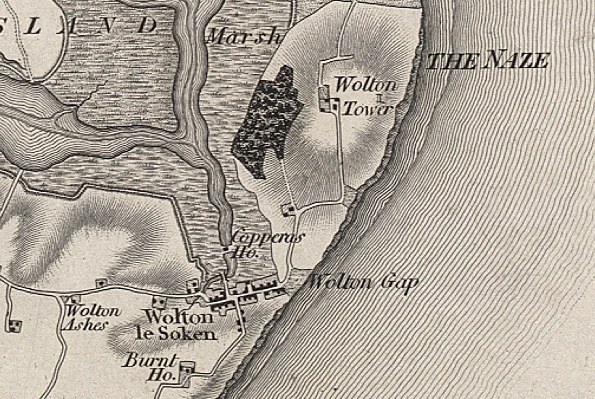