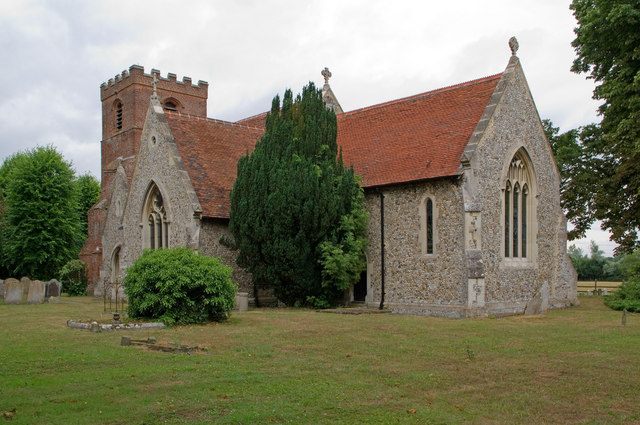 UGLEY, or OAKLEY, is a small scattered village, on the Newmarket road, 5 miles North by East of Bishop Stortford, and 2 miles North by West of Elsenham Station, on the North Eastern Railway. Its parish contains 381 souls, and 2038 acres of land.

In Domesday Book, the manor is written Ugghelea, which is supposed to be a barbarous corruption of Oakley. At the survey, it was held by Alberic de Vere; and in 1409, it was granted, as part of the Duchy of Lancaster, to John Leventhorp, whose family held it till the early part of the 17th century.

In 1667, it was sold to Sir Thomas Middleton, whose heirs sold it to the Heaths. Robert Gosling, Esq., is now lord of the manor of Ugley Hall, but a great part of the parish belongs to Col.Chamberlayne, John Lake, Esq., Edward Sandford, James Newman, and several smaller owners.

Bollington Hall estate has been held by Westminster Abbey, and the Chamond, Buck Symonds, Plumer, and other families. Orford House, 1½ miles south of the church, is the seat and property of Colonel Chamberlayne. It is a large mansion, with pleasant grounds, and was built by Admiral Russell, who was created Earl of Orford in 1697. It was enlarged and much improved by the late Isaac Whittington, Esq.

The Church (St. Peter,) is a small ancient structure, consisting of a tiled nave and leaded chancel, of one pace, a south chapel, and a brick tower, surmounted by a cupola, containing three bells. It was appropriated to St, Osyth Priory.

For clothing the poor parishioners of Ugley, John Buck left 7A.lR.38P. of land, in 1558, and it is now let, with some buildings upon it, for £15.10s. a year. Three poor men and three poor women of this parish are clothed every third year from Robert Buck's Charity, of which the Draper's Company, London, are trustees. The founder of this charity resided at Bollington Hall, and died in 1620. A National School was built here in 1848, at the cost of about £400.

Back to History of Ugley 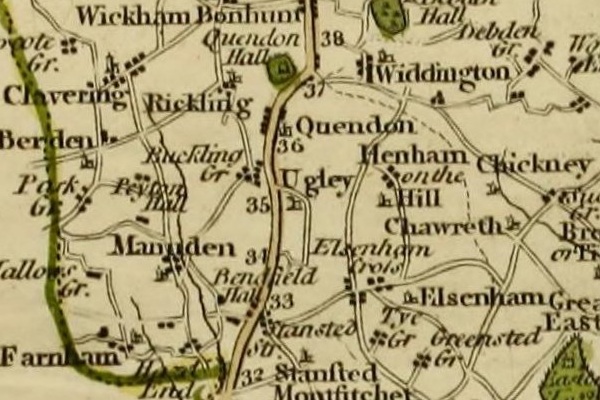 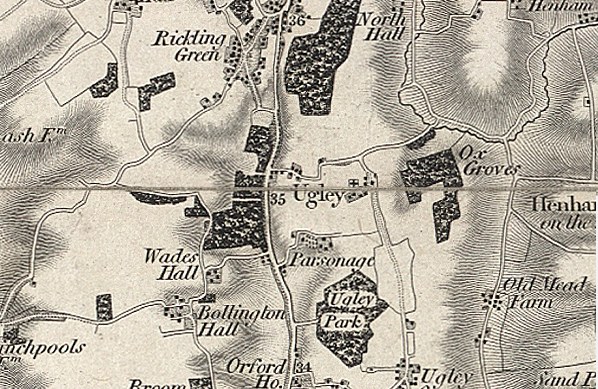