TERLING is a pleasant village on the banks of the small river Ter, near Lord Rayleigh's beautiful park of Terling P1ace, 3½ miles West of Witham, and 8 miles North North East of Chelmsford.

Some of its houses are ancient buildings of timber and plaster, and one of them (the residence of R. Ellis, Esq.,) is in the Elizabethan style, and contains some finely carved oak wainscoting. A pleasure fair is held here on Whit-Monday.

The manor houses of all, except the first, are now occupied by farmers. Loys Hall was formerly very extensive, but a great part of it was taken down many years ago. It was a seat of the Rochester family for many generations.

The manor of Terling was part of the endowment of Ely Abbey, till William the Conqueror gave it to Ralph Peverel. It afterwards passed to the Bobuns, earls of Essex and Hertford, of whom it was held in 1269 by the Bishop of Norwich, and his successor had a palace and park here, with a chapel, which had the privilege of sanctuary, and to which the celebrated Hubert de Bargh, earl of Kent, fled for refuge from the pursuit of his enraged Sovereign, Henry III.

It was held by the see of Norwich till Bishop Nix exchanged it with the Crown, in 1535 for the manor of St. Bennet de Hulm. Henry VIII. occasionally resided here and at Jericho, but he granted the manor and rectory to Lord Chancellor Audley, who, in 1540 had license to enclose 3OOA. for a park.

From the Audleys, the manor passed by marriage to Thomas Howard, duke of Norfolk, who sold it to Thomas Mildmay. It was afterwards held by the Westerns and Featherstonehaughs; and was purchased of the latter in 1761 by John Strutt, Esg., grandfather of Lord Rayleigh, the present owner, who resides at Terling Place, a large and elegant brick mansion, with extensive wings, enclosed in a beautiful park of about 200 acres, well wooded, and crossed by the winding stream or stream of the small river Ter.

Great improvements were made in the house and grounds by the two late proprietors, and others are now in progress, to complete the designs of the late Colonel Strutt, who built the wings.

The principal apartments are spacious and contain a fine collection of paintings and other works of art. The entrance hall is surrounded by a gallery, under which are casts of the Elgin marbles; and the staircase is after the model of the Beauregard, near Paris.

Among the pictures are four Florentine views by Canaletti, and a fine copy or the Ascension by Rembrant. In 1824, the gardener dug up in the grounds a number of gold and silver coins, some of the reigns of Constantius and other Roman emperors; and among them were two rings.

John Strutt, Esq., who purchased this estate, represented Maldon in three successive parliaments, and died at the advanced age of 90. His eldest son, the late Colonel Joseph Holden Strutt, married Lady Charlotte Mary Gertrude, daughter of the Duke of Leinster, and in 1821, she was created Baroness Rayleigh.

The Right Hon. John James Strutt, her only son succeeded as Lord Rayleigh in 1836, and was born in 1796. His son and heir, the Hon. John William, was born in 1842. The late Col. Strutt was one of the parliamentary representatives of Maldon from 1790 till 1827.

His brother, the late Major- General William Goodday Strutt, died at Little Baddow, Feb. 6th, 1848, in his 86th year. This distinguished officer entered the army in 1778. He was at the siege of Gibraltar, and in many other important engagements, and was appointed Governor of Quebec in 1801. 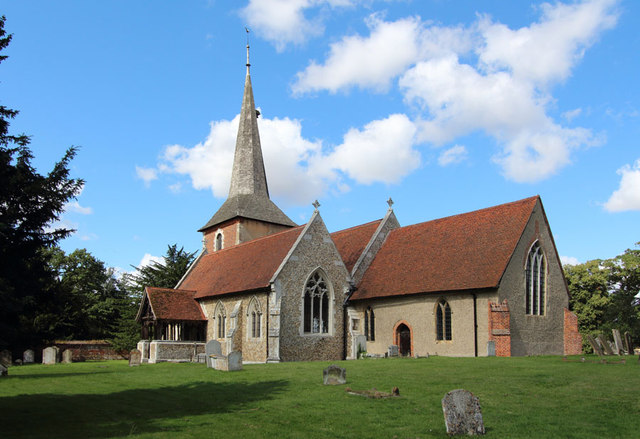 All Saints Church, Terling.
© Copyright John Salmon contributor to the Geograph Project and licensed for reuse under this Creative Commons Licence

Terling Church (All Saints,) is a spacious building, chiefly in the perpendicular style of the 15th century. It bas a nave, south aisle, and chancel, with a tower which contains five bells, and was rebuilt in 1732, after the old one had fallen down.

The tower is of brick with stone dressings, and is crowned with a spire. The church was thoroughly repaired and elegantly fitted up by the late John Strott, Esq. The porch is of wood, in the Tudor style. In the aisles are some fine old brasses, and under the north chapel is the family vault of the Strutt.

On the Green is an Independent Chapel, erected about 90 years ago.

For distribution in clothing among the poor of this parish, not receiving parochial relief, about £30 is paid yearly to Lord Rayleigh, from the funds of Henry Smith's Charity.

In 1775, Benjamin Joscelyn left a farm to John Srutt, Esq., charged with a yearly rent of £15, to be applied as follows :- £10 for schooling poor boys of Terling, and £5 for schooling five of Kelvedon. This charity was void under the Mortmain Act, but was established in 1820, when the late Col. Strutt granted an annuity of £15 out of Troys Farm.

The schoolmaster and freescholars are appointed by Lord Rayleigh, who contributes liberally towards the support of the school. The rents of two cottages and a building, formerly the parish workhouse, are applied to the repairs of the church, though they are supposed to have originated from the gift "four houses," by an unknown donor, to the poor. About 20 years ago, the late Col. Strutt gave a new building in exchange for two ancient tenements, whioh had been used as the workhouse.

Back to History of Terling 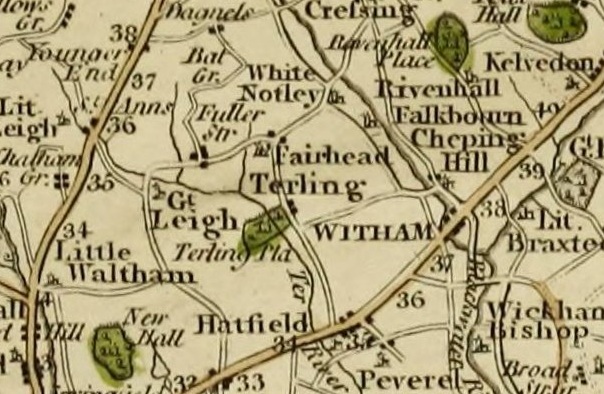 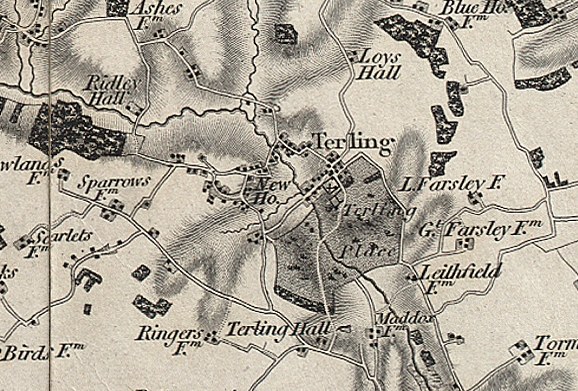