TAKELEY parish has a long straggling village, called Takeley Street, 4 miles West of Dunmow, and East of Bishop Stortford. It comprises 899 inhabitants, and 3154 acres of land, including Smith's Green, Morrell Green, and Brewer's-end, and many scattered farm-houses, etc.

It gives rise to the Pincey Brook, and has a fertile soil and undulated surface. It is in four manors, which were held by Robert Gernon, Eudo Dapifer, and St. Valery Priory, at the Domesday Survey.

Thomas Mumford, Esq., is lord of the chief manor, called Waltham Hall, or Takeley, which was held by Waltham Abbey, and after dissolution by the Heigham, Miller, Petre, Shaard, and other families.

The small manor of Colchester Hall belong to St. John's Abbey, at Colchester, and was afterwards held by the Wyberd, Wiseman, Crackbone, Plumme, and Russell families.

The manor of St. Valery's, vulgarly called Warish Hall, was given by William the Conqueror to the Abbey of St. Valery, in Picardy, which had a small Priory here, as a cell to that Abbey, founded in the reign of Henry I. On the suppression of alien monasteries, this manor was given to William Wickham, Bishop of Winchester, who settled it as part of the endowment of New Collage, Oxford, to which it still belongs. In the court rolls it is called, 'Takeley St. Walerici'.

Bassingbourne Hall, a large mansion on a commanding eminence, was erected by Fras. Barnard, Esq., who purchased the estate in 1745, and it still belongs to his family. The Hall was occupied by the late Sir Peter Parker. 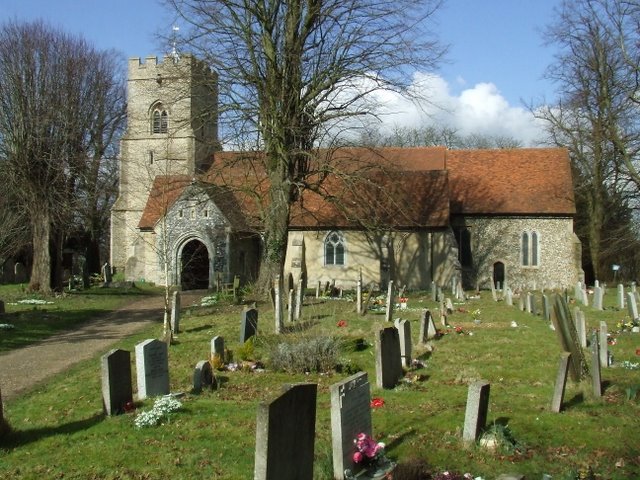 The Church (Holy Trinity,) is an ancient structure with a tower and four bells, and has a south aisle, in which there is an apartment, called Bassingbourne's Chapel, opposite which is a strong room, in which relics and images of saints were deposited in Roman Catholic times.

A brass plate is inscribed to the memory of Hannah Knollys, who, in 1689, left a house and garden for the parish clerk, and a yearly rent-charge of £7 for the vicar. The Bishop of London is appropriator of most of the great tithes, and also patron of the vicarage, valued in K.B. at £11, and in 1831 at £218, and now in the incumbency of the Rev. V. N. Child, M.A., who has a handsome residence and 22A. of glebe.

An Independent Chapel, erected in 1808, and several houses in Takeley Street, are in the extensive parish of Hatfield Broad Oak.

Back to History of Takeley 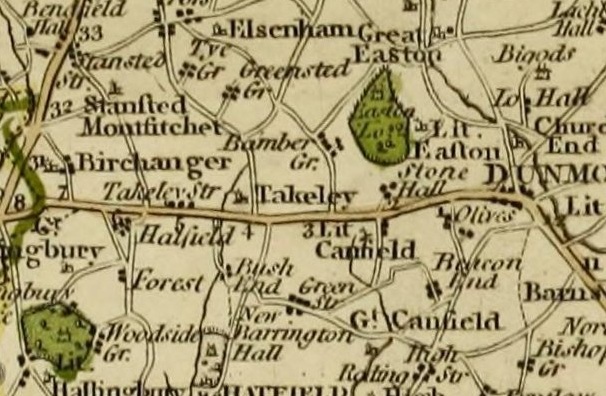 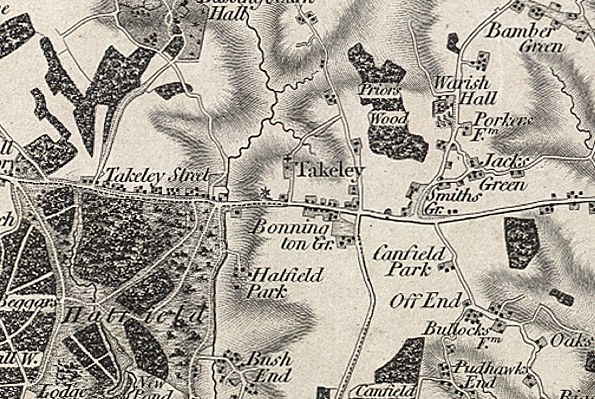