SOUTHEND, in Prittlewell parish, is a handsome town and fashionable bathing place, delightfully situated near the mouth of the Thames, on the north side of the estuary of that noble river, which is here about five miles broad.

The town stands picturesquely on the side and crown of a woody eminence rising boldly from tbe sands, opposite Sheerness, and is distant 4 miles South by East of Rochford, 22 miles South East by South of Chelmsford, and 42 miles East of London, to which steam vessels ply daily in winter, and five times a day in summer.

The wooden Pier, which here projects about a mile into the estuary, and was constructed under the powers of acts of parliament passed in 1835, and preceding years.

Southend first began to attract visitors, as a watering place, about the close of last century, but continued nearly stationary for a considerable time, owing to the failure of the original proprietors of the principal buildings, which were sold by auction in 1800, to James Heygate and Thomas Hope, Esqrs.

In 1804, it was visited by the late Queen Caroline and Princess Charlotte, and by several families of distinction, and since then several spacious hotels and many large and handsome lodging houses, etc., have been erected, so that it now contains more than 1600 settled residents, and has often as many visitors, being now one of the favourite retreats of the wealthy inhabitants of the metropolis, and it is often thronged in summer, by numerous pleasure parties, who leave their pent-up offices, shops, and houses, or a day's excursion on the Thames.

The Assembly Room and the Theatre are fitted up in a superior style of elegance, and the latter was erected in 1804, and belongs to Thomas Trotter, Esq.

The principal inns are the Royal Hotel, an extensive and commodious building with elegant assembly and coffee rooms, standing at the east end of the terrace, in full view of the Thames, the pier, and the ocean; the Ship Hotel, which besides every necessary accommodation for comfort and convenience, is supplied with hot and cold baths; and the Hope and the Castle, both very respectable inns. 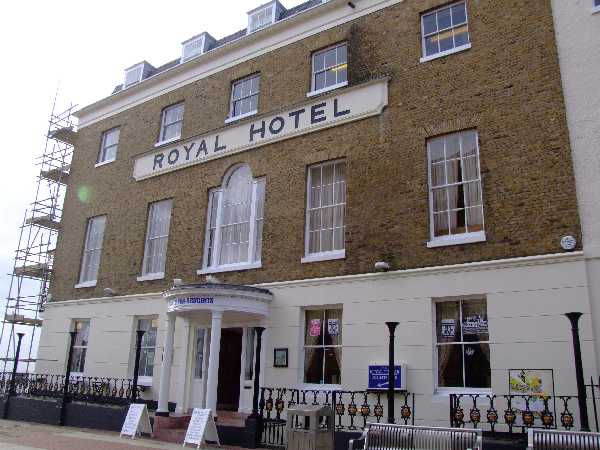 Royal Hotel, Southend-on-Sea.
© Copyright Julieanne Savage contributor to the Geograph Project and licensed for reuse under this Creative Commons Licence

The TERRACE, sometimes called New Southend, is an extensive range of large houses, ornamented with stone pilasters, and cornices, and commanding, from their lofty situation, an extensive view, exhibiting the most striking feature of coast scenery, with the ever changing prospect of the waters of the Nore, the Medway, and the Sea; animated by a constant succession of vessels of various descriptions passing and repassing; with the Isle of Sheppey, the fortress of Sheerness, and the hills of Kent in the distance.

At high water the view is strikingly beautiful; the river being five miles broad, and the cliff, on which the Terrace is built, being high enough to command the whole breadth of the estuary, as well as the broken woodland shore on each side of the town.

The most agreeable walks are in front of the Terrace, both on the acclivity, and along the beach, upon the extensive and firm beds of smooth sand, left by the tide. The air is dry and healthy; and the water, notwithstanding its mixture with the Thames, is clear, and sufficiently salt.

The bathing machines, baths, etc., are clean and commodious, and the neighbouring country affords many delightful walks and drives, and is highly cultivated and plentifully wooded. 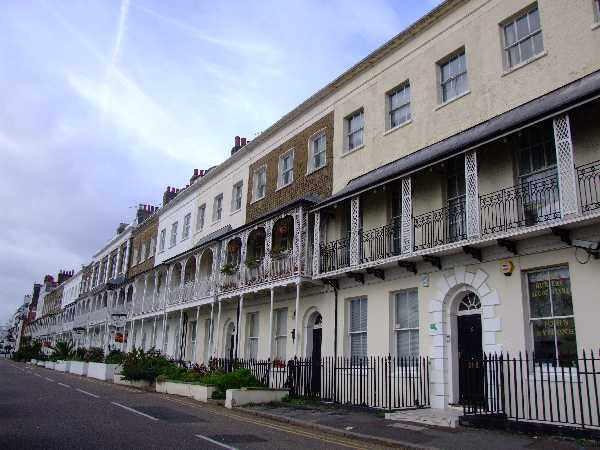 Royal Terrace, Southend-on-Sea.
© Copyright Julieanne Savage contributor to the Geograph Project and licensed for reuse under this Creative Commons Licence

A handsome Church (St. John the Baptist,) was built at Southend, in 1840, at the cost of £1500, raise by subscription. The benefice is a perpetual curacy, vested in the patronage of three trustees, (Rev. R. Eden, G. Tufnell, and General Strutt,) and now enjoyed by the Rev. G. Lillingston. Here is an Independant Chapel, built about 1812, by a congregation formed in 1806, and now under the ministry of the Rev. W. Wager.

Southend Literary Institution, established in 1846, has already a valuable library of about 1400 volumes, and occupies a neat building on the cliff, with semi-circular front and a spacious reading room, well supplied with London and provincial newspapers, popular periodicals, etc. Mr. W.R. Warwick is the honorary secretary.

The gentlemen of the Southend and Rochford Hundred Steeple Chase meet occasionally at the Ship Hotel, and the race is usually a sweep-stakes of £3 each, with £20 added.

Back to History of Southend-on-Sea 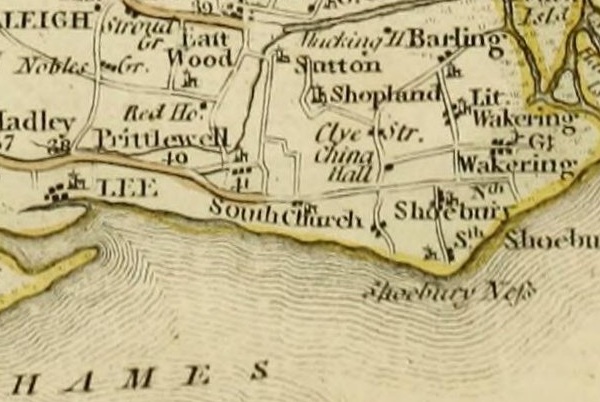 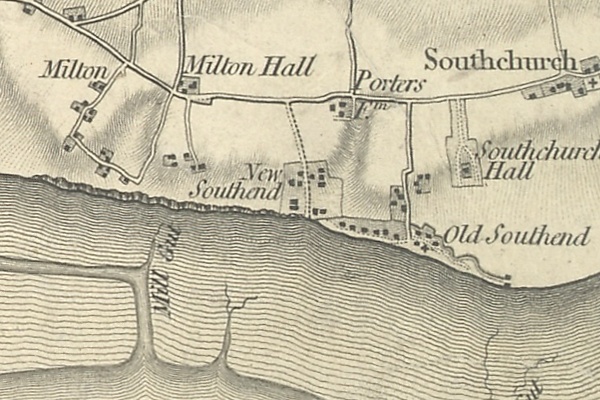