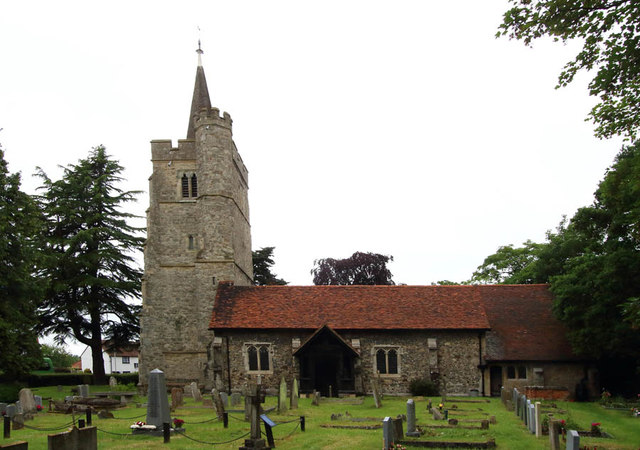 RUNWELL, a scattered village and parish on the north side of the vale of the Crouch, 4½ miles North West of Rayleigh, and 10 miles South East by South of Chelmsford, containing 324 soul, and 2,059A.OR.3P. of land, chiefly a clayey loam, and extending in gentle slopes two miles north from the river, to which it adds a tributary stream.

Thomas Kemble, Esq., is lord of the manor, and owner of most of the soil, and has a pleasant seat here, called New Runwell Hall, the old hall being now a farm house.

This manor was given by King Alhelstan, to the Dean and Chapter of St. Paul's, London. In 1653, Lord Clinton granted it to Sir John Gates; and it afterwards passed to the Tongue, White and Rogers families.

At the north end of the parish are some remains of an ancient manor house, called Flemyngs, which was a seat of the Flemyng family, in the 14th and 15th centuries, and was a very extensive mansion, but the chief part was pulled down many years ago, or destroyed by a fire, which is said to have demolished thirty rooms, and a large chapel.

Before this accident, it contained above 50 spacious apartments. It had an extensive park and a large warren.

Fragments of coffins sand human bones have frequently been thrown up by the plough, near the site of the chapel.

From the Flemyngs, this estate passed to the Sulyards, who held it till 1540; and it afterwards passed to the Garney, Wright, Holt, and other families.

The Church (St. Mary,) is a venerable fabric in the perpendicular style, consisting of a brick nave, chancel, and north aisle, and stone tower, containing four bells, and crowned by z shingled spire. Part of the ancient wooden screen remains, and in the aisle, is a mural monument, with the effigies of Eustace Sulyard and his wife, cut in brass.

In the chancel, is a grey marble monument, in memory of Edward Sulyard, the last of his family, who died in 1692.

The Rectory Housee is a handsome new building, with tasteful pleasure grounds.

The parish is mostly freehold, and a great part of it is occupied by the farmers of the surrounding parishes. William Cleeve, James Sneezum, and Henry Tilbury, have land here.

Back to History of Runwell 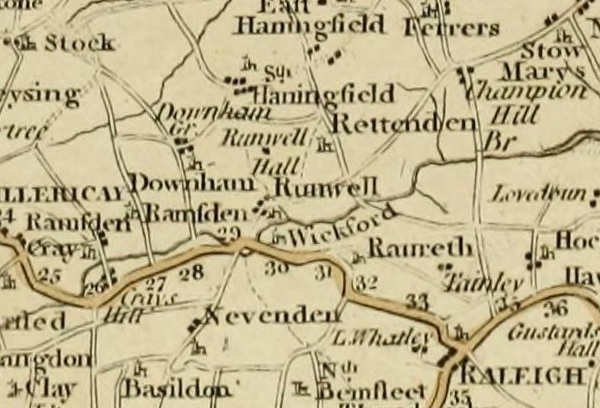 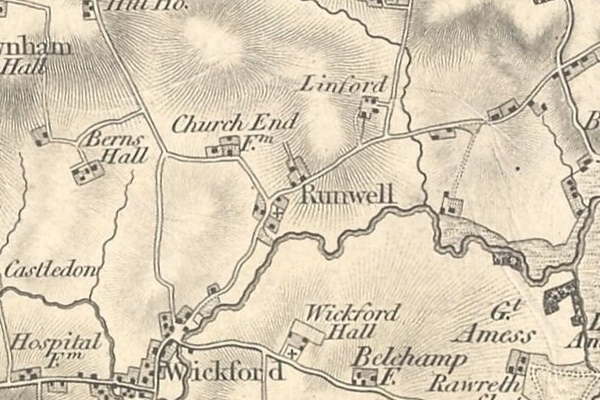