RAYLEIGH, a small ancient town, which formerly had a market, is pleasantly situated on the London and Rochford road, 5 miles West of the latter, 33 miles East of the former, and 13 miles South East by South of Chelmsford.

Its market, formerly held on Saturday, fell into disuse about 30 years ago, but it has still a large horse and cattle fair, on Trinity Monday.

Its parish contains about 1500 inhabitants, and 2873 acres of land, including several large woods, adjoining those of Thundersley and Eastwood.

Rayleigh has been variously written as Raghelia, Raleigh, Rayleg, etc., and was the head of the great Barony of Suene, the Saxon, who is said to have built a Castle here, of which some bold earth~works still remain.

These consist of a mount, with an oval shaped base, surrounded by a ditch, defended by other embankments, particularly on the east side. The summit or the mount is divided; the western part is circular, and upwards of 100 feet high; the other is somewhat of an oval form, and lower.

The principal ditch is 36 to 50 feet wide, and the interior vallum 50 feet high. In some places the works are much broken, and the ditches partly filled up.

In Domesday Book there is said to have been "a park here, with six arpenni of vineyard, yielding, in a good season, twenty modii of wine."

The town consists of one wide street, of considerable extent; and from the site of the castle, at the upper end of it, an extensive and interesting prospect is presented over the surrounding country.

In 1163, Henry de Essex, a descendant of Suene, having forfeited his barony, this lordship was retained by the Crown, till it was granted by Henry III. to Hubert de Burgh, afterwards Earl of Kent. In 1340, the manor, with the honor or barony of Rayleigh, was granted by Edward III. to William de Bohun, Earl of Northampton, Essex, and Hereford.

In 1380, Richard II. granted to the Earl of Oxford, for life, "the honor, fee, fair, and market of Ray1eigh, with the profits of the herbage of Rayleigh Park."

In the 16th and l7th centuries, they were held by the noble family of Rich; and they were sold about 1700, by Daniel Earl of Nottingham, to Robert Bristows, Esq., whose descendant of the same name is now lord of the manor, but a great part of the parish belongs to Sir R.D. Neave. John Fane, Esq., and Thomas Brewitt, Esq., the latter of whom has a pleasant seat here, called Down Hall, formerly belonging to the Belhouse, Knivet, Clopton, Downe, and Humphreys families.

Two old manor houses, called Herberges and Whatley, were held by the Humphreys family in the 18th century. 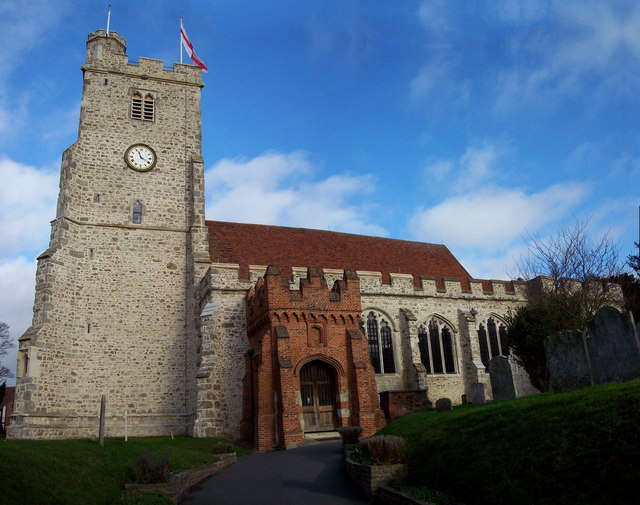 The CHURCH (Holy Trinity,) is a stately edifice, chiefly in the perpendicular style, and consisting of a spacious nave, chancel, aisles, and porch, with a lofty tower, containing six bells, and crowned by a short spire. The walls are embattled, and finely chequered with flint and stone. The south chapel is repaired by the owner of the site of the castle.

The oldest inscription in the church is dated 1416, but there is a mutilated ancient altar-tomb, displaying very beautiful workmanship, in the pointed Gothic style, which prevailed from the 12th to the 14th centuary. It no doubt covers the remains of some dignified person, but the inscription is gone.

A tomb under the arch, between the chancel and north aisle, is defaced, but some shields remain, with the arms of Barrington.

There was a chantry here, but its founder is unknown.

Here is a Baptist Chapel, belonging to a congregation formed in 1797, under the ministry of the present venerable pastor, the Rev. James Pilkington. Here are also two small places of worship belonging to the Wesleyans and Antinomians.

Back to History of Rayleigh 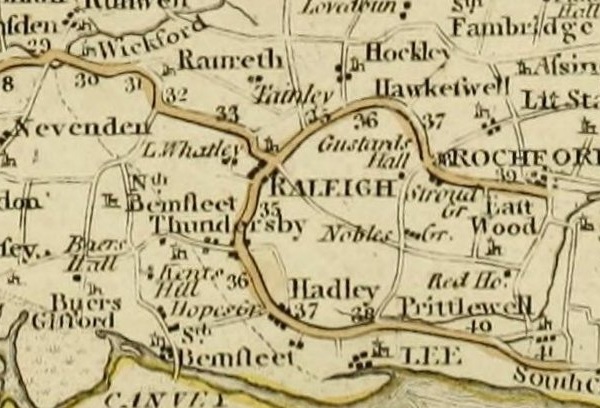 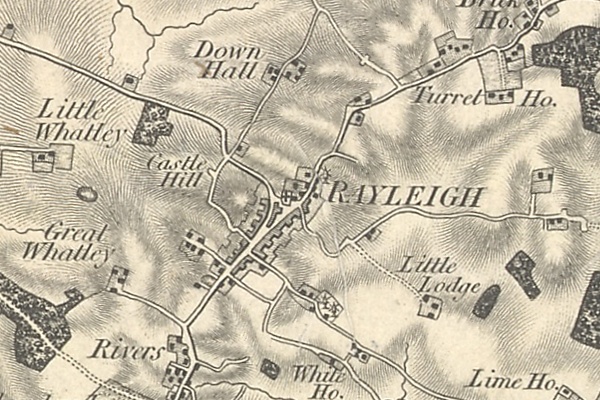