PANFIELD, or Pantfield, is a pleasant and salubrious village and parish on the western side of the vale of the river Pant, or Blackwater, 2 miles North North West of Braintree. It contains 299 souls, and 1475 acres of land.

Panfield Hall, a fine old mansion, commanding extensive prospects, has been much altered by frequent repairs, but its quadrangular tower and handsomely clustered chimneys still retain their ancient appearance. It has long been occupied with the farm by the Lambert family, and belongs to Guy's Hospital, London.

It was built in 1546, and enlarged in 1583, by George Cotton, Esq., whose family obtained the estate by marring the heiress of the Langham family; before whom it had belonged to the Watervils.

Near the church was a Priory, founded at a very early period, and made a cell to St. Stephen's Abbey, in Normandy, in 1070, by Waleran Fitzralph, who endowed it with the little manor of Panfield. It was one of the alien priories seized by Edward II., in 1285.

It was afterwards restored, but was finally suppressed in 1415, when it was granted by Henry V. to John Woodhouse, of Norfolk, to be held by the service of a red rose. It reverted to the Crown in 1460, and afterwards passed to the Bourchier, Capel, Wright, Wilson, and other families.

The Church (St. Mary and St. Christopher,) is a small neat structure, on an elevated site. It has a tower, containing three bells, and crowned by a shingled spire. The chancel is large in proportion to the nave, and has an elegant altar-piece, given by the Rev. Thos. Kynaston, a late rector; and several monuments belonging to the Cotton and other families.

Back to History of Panfield 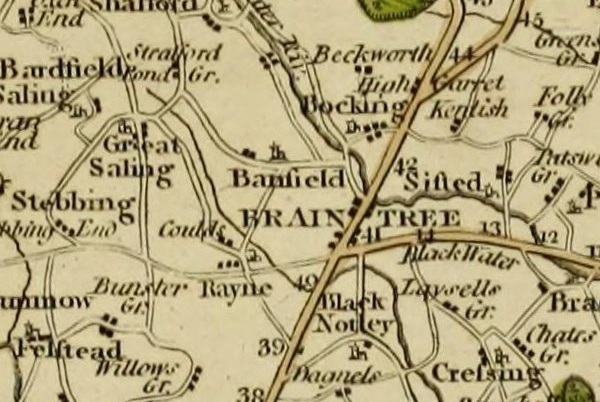 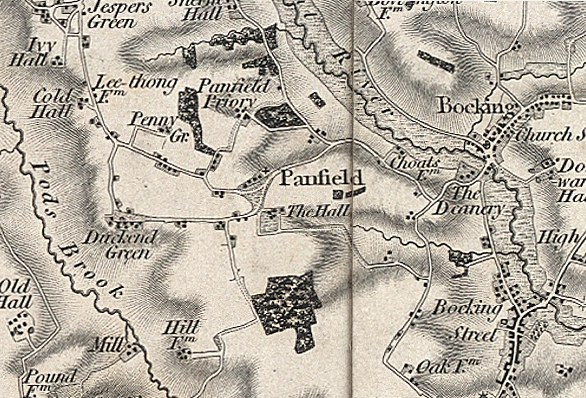