ORSETT, a large and pleasant village, 9 miles South by West of Billericay, 5½ miles North of Tilbury Fort, and 12 miles East South East of Romford, gives name to the large union.

Its parish comprises 1390 inhabitants, and 4136 acres of land, including the village of Baker Street, about a mile West of the church; but exclusive of a detached member, called Orsett Hamlet, which has 45 inhabitants, and is distant 13 miles north of Orsett, being in Chelmsford Hundred, and comprising a considerable parcel of land, between the parishes of Buttsbury, Stock, and Margaretting, belonging to Lord Petre, and anciently forming Crondon Park, which was divided into farms many years ago.

This hamlet is only connected ecclesiatically with Orsett, and pays a yearly modus of £16 to the rector, in lieu of tithes.

Orsett is supposed to have been called Horse Heath, by the Saxons; and about 1½ mile North West of the village is Orsett Fen, where there is a stinted common of about 200 acres.

Before the conquest, the parish belonged to the See of London; but at the Norman Survey, part of it belonged to Eustace, Earl of Boulogne.

Mrs. Baker is now lady of the manor of Orsett, but the greater part of the parish belongs to W. and R. B. Wingfield, Esqrs., Col. Bonham, S. Newcome, Esq., and several smaller proprietors.

Orsett Hall is a large and ancient mansion, which belonged to the Bishops of London till the reign of Elizabeth, when it passed with the manor to the Crown. James I. granted it to Francis Downes, Esq., but in 1650, it passed to John Hatt, Esq.

In 1746, it was sold by the trustees of Richard Letchmere, to Richard Baker, Esq.

Near it are the remains of a moat, and in the parish are several other good houses, one of which is Orsett House, a respectable boarding house.

The manor of Sabur, or Seborow, extends into this parish and those of Mucking and Chadwell, and anciently belonged to St. Mary's Hospital, without Bishopsgate, London; and here is another estate, called Lost Hall, which has been held by the Baesh, Parker, and Downnes families, and was anciently the endowment of a chantry in the Bishop's Palace, London. 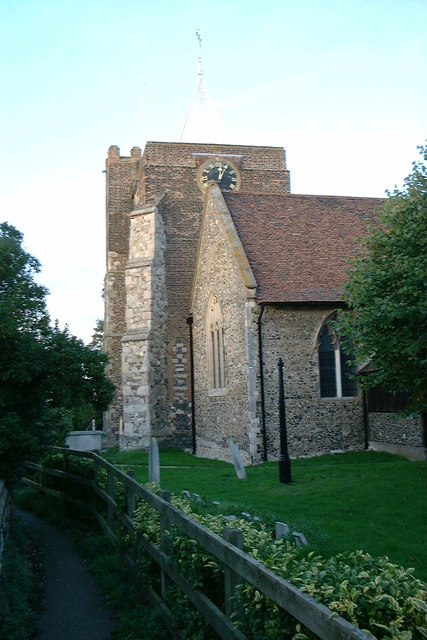 St Giles' and All Saints' Church.
© Copyright Dave Kelly contributor to the Geograph Project and licensed for reuse under this Creative Commons Licence

The Church (St. Giles and All Saints,) is a large and and structure, consisting of a nave, with aisles, a chancel, with north and south chapels, and a brick tower, crowned by a wooden spire. It is in good repair, and had formerly a chantry, founded by Thomas Hotoft.

It has several neat monuments; and in the chapel belonging to Orsett Hall is a handsome one, in memory of John Hatt, Esq., who died in 1658.

Here is an Independent Chapel, and the parish has National, Infant, and Diocesan Schools, and various Charities for the poor. 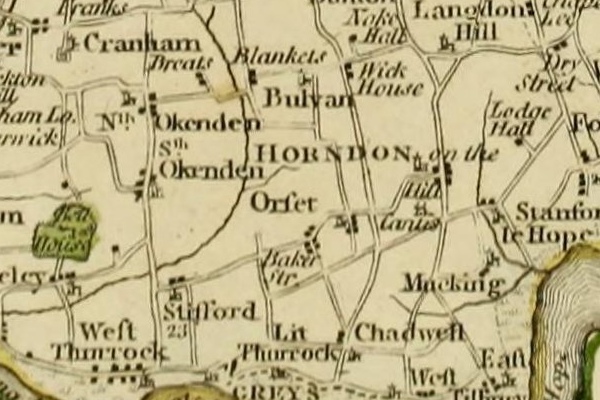 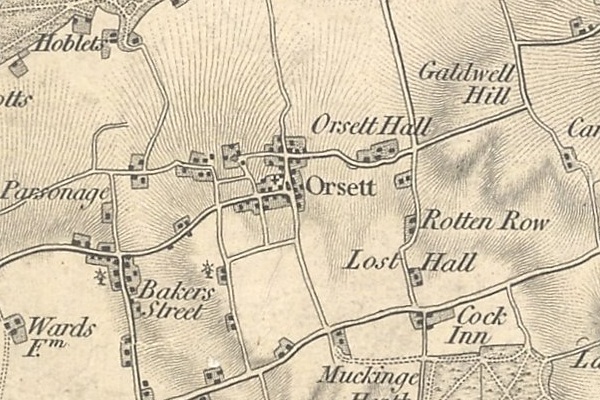