LATCHINGDON, a pleasant straggling village, on the north side of the vale of the Crouch, 6 miles South South East of Maldon, and 13 miles East South East of Chelmsford, is mostly in the united parishes of Latchingdon and Snoreham, and partly in Purleigh parish.

The inn commonly called "Latchingdon Lion," is in Snoreham; and the neat and commodious Police Station, where the magistrates hold petty sessions for Dengie Hundred, every alternate Wednesday, stands in Purleigh parish, and was built in 1842, at the cost of £1750. This building has a large magistrates' room, and accommodations for the superintendent and two police constables. William Codd, Esq., of Maldon, is clerk to the magistrates.

The village is a great thoroughfare between Maldon and Burnham and Southminster. The parish of Latchingdon has 372, and that of Snoreham 211 inhabitants, and they comprise together about 4060 acres, including part of Bridge Marsh, an island in the river Crouch, containing about 450 acres, two-thirds of which are in Latchingdon, and one-third in Althorne parish. Ecclesiastically they are separate parishes, but they are united for the support of the poor and roads.

In old records, Latchingdon is written Lacedun, Lassenduna, etc. Before the Conquest, it was held by nine freemen, and it is now in several manors, which have been held by the Peverell, Dapifer, Lachyndon, Moton, Codd, Harris, and other families.

Lord Rayleigh is lord of Latchingdon, or "The King's Manor," and George Vanderzee is lord of the manor of Lawling Hall; but the latter, with the hall and 570A. of freehold land, is now advertised for sale. This house is about 2 miles North North East of the village.

Tiled Hall, a large moated farm house, on a commanding eminence near the church, gives name to a manor which has merged into that of Great Bursted; and was formerly a seat of the Betenson and Markham families.

C.H. Polley, John Hutley, J. Laver, P. Wright, and several smaller owners have estates here. Lawling, or Lalling, estate was given in 993, by Byrhtnoth, the brave Earl of Essex, to the prior and convent of Holy Trinity, Canterbury; and after the dissolution, it was granted to Sir Richard Rich. It afterwards passed to the Westerns and Hammonds. 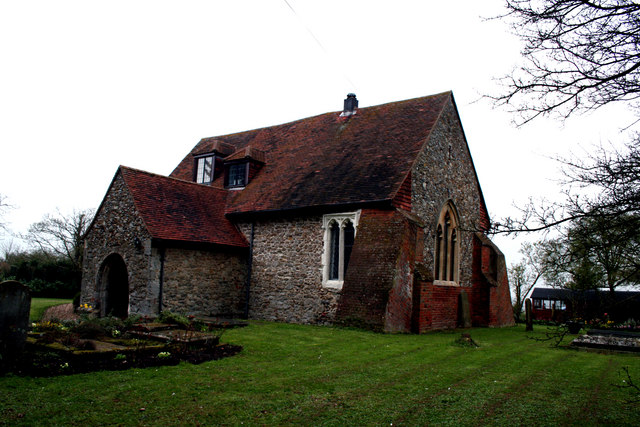 Latchingdon Church (St. Michael,) is a small tiled building, consisting of a nave, chancel, and porch. The tower fell down more than thirty years ago, and its remains now form part of the garden wall at Tiled Hall.

The foundations of a chapel at Lawling Hall, built for the convenience of that part of the parish, are yet visible.

The Rectory House is a commodious building, occupied by the curate.

SNOREHAM parish, is united with Latchingdon for the support of the poor and roads, and comprises part of the village of Latchingdon, from which it extends more than a mile northward.

It has only about a thousand acres of land, and 211 inhabitants; and has neither church nor parsonage: the former, which was dedicated to St. Peter, went to decay some centuries ago, though some remains of it may yet be traced near the Hall, where a sermon used to preached annually, under a tree. The parishioners use Latchingdon church, and contribute to its support.

Lord Rayleigh owns most of the parish, and is lord of the manor, which has belonged to his family since 1743, when it was conveyed to John Strutt, Esq., by R. Courteville, Esq.

Back to History of Latchingdon 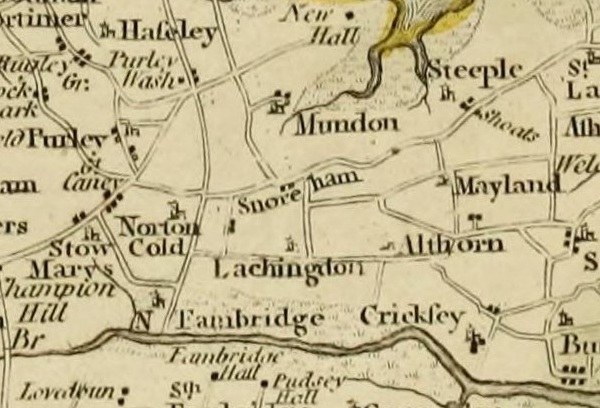 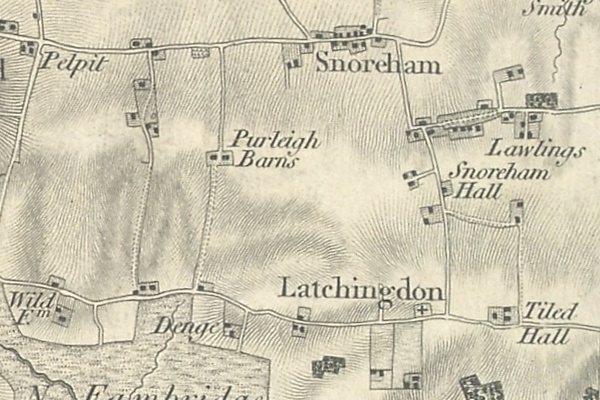