History of Lambourne and Abridge LAMBOURNE parish comprises several scattered houses near the church, but the chief part of its population is a mile to the west, in the improving village of ABRIDGE, on the south side of the river Roding, 4 miles South by East of Epping, and on the London and Ongar road, 13 miles North East of the former, and 7 miles South West by South of the latter town.

Many good houses, etc., having been built, during the last thirty years, at Abridge, which has its name from the bridge over the Roding, and has a modern chapel of ease, an Independent chapel, a brewery, and a fair for cattle, etc., on the 2nd of June.

In 1050, the manor of Lambourne belonged to Leffi, a Saxon, but at the Conquest it was given to Eustace, Earl of Boulogne. It was afterwards held by the Lambourne, Lampet, Hatfield, Barfoot, Aland, and Fortescue families. In 1782, it was purchased of the latter by the Rev. Edward Lockwood, and it now belongs to Wm. Joseph Lockwood, Esq., who has a pleasant seat here, called Bishop's Hall, but part of the parish belongs to Sir Charles C. Smith, Bart., Mr. Samuel Crane, Mr. John Jones, and a few smaller freeholders.

Lambourne Hall is an old farm house, which has been a large mansion, and near it was a handsome house, built by the first Lord Fortescue, but it was pulled down many years ago.

A small manor or estate, called Shepes Hall, was long held by the Bishops or Norwich, among whom, the earliest who occasionally resided here, was the warlike Bishop Spencer, who held the estate of Richard II. in capite, as of the manor of Havering, by the service of making sixty perches of the royal park-pale with his own timber.

This martial ecclesiastic bred to arms in Italy, in the service of Pope Adrian (Nicholas Breakspear,) in his wars against the Duke of Milan, obtained from his holiness the bishopric of Norwich, as a reward for his services, in 1370.

During Wat Tyler's rebellion, in 1381, Bishop Spencer put himself at the head of a small body of loyal subjects, and attacking the rebels, by dint of valour, aided by stratagem, made a terrible slaughter, "beheading some, killing others, and capturing their leader, Littster, a dyer of Norwich, whom sent to London, and who was there condemned and executed."

The Bishops of Norwich held this estate till 1536, when it was given by Henry VIII. to Lord Chancellor Audley. It was afterwards the seat and property of the Walkers, Waylets, and Balls. In 1826, it was sold by E.H. Ball, Esq., to the Rev. Edward Dowdeswell, who gave it to Miss Lockwood Percival.

It now belongs to W.J. Lockwood, Esq., of Bishop's Hall, which stands on the crown of a bold eminence, commanding fine views of Epping and Hainault Forests, and the surrounding country, as far as the Thames and Kentish Hills.

The site of the ancient castellated mansion, which was occasionally occupied by the bishops, is surrounded by a moat, enclosing an area 200 yards square.

Dews Hall, a little south of the church, gives name to a manor now belonging to W.J. Lockwood, Esq., and formerly to the Dukes of Buckingham, and the Sulyard family. The other estates, or reputed manors, in the Lambourne parish are, Lambourne-Abridge, or St.John's (now a small farm,) Affebruge, or Abridge, formerly held by a family of its own name; Priors, which belonged to some religious house; and Knolls, which was purchased by the Lockwoods, of the Fortescues. 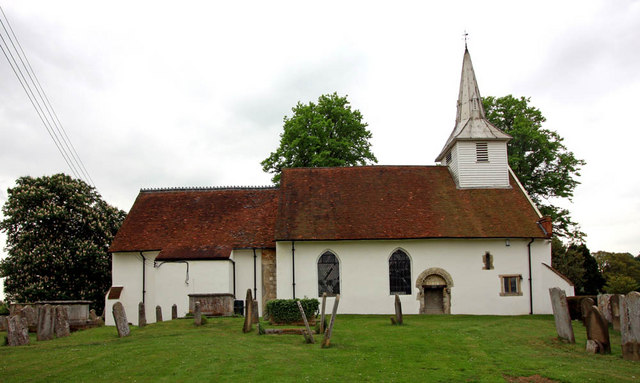 St Mary and All Saints' Church, Lambourne.
© Copyright John Salmon contributor to the Geograph Project and licensed for reuse under this Creative Commons Licence

The Parish Church (St. Mary and All Saints,) is a neat ancient structure, with a nave and chancel of one pace and tiled, and at the west end is a wooden tower, containing three bells, and crowned by a leaded spire.

In the interior are many handsome monuments, one of which has a long inscription in memory of Dr. Wynnyffe, bishop of Lincoln. In the chancel are three beautiful stained glass windows, one containing five pieces of valuable old painting brought from Basle, in Switzerland, in 1817. Under a square tomb in the churchyard, are deposited the remains of Admiral Sir Edward Hughes, who served in the Navy more than half a century, and died at Luxborough House, in Chigwell, in 1794, aged 77 years.

The church was appropriated about 1200, by Robert de Lambourne to the canons of Waltham Holy Cross.

In the village of Abridge, is a neat Chapel of Ease, built by subscription, in 1836, at the cost of about £52O; and another place of worship built by Wes1eyans in 1833, but now belonging to Independents.

Here is a National School, built about seven years ago; and the parish sends, three children to the Free Grammar School at Chigwell, and 20 to the Charity School at Stapleford Abbots.

The poor parishioners have a yearly rent charge of lOs. out of Priors farm, left by one Broomfield. The churchwardens hold a house and 4A. of land, and the former is occupied by paupers, and the latter let for £14, which is appled to the service of the church, as also is a yearly rent-charge of 6s.8d., left by one Barfoot, out of Sym's croft; and the rent of 2A., in Thoydon parish, now let for £5.

Back to History of Lambourne 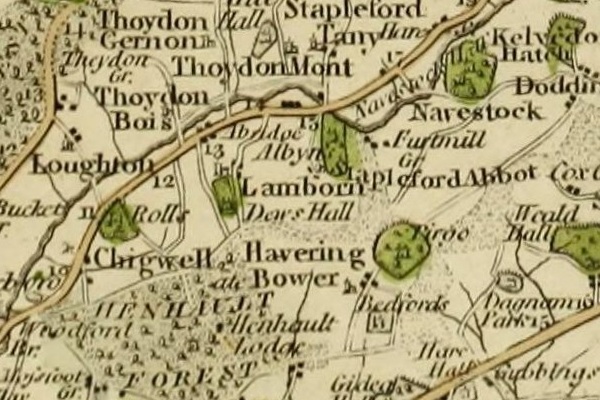 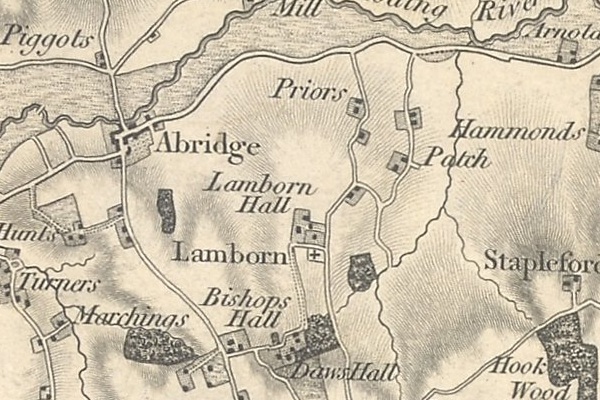