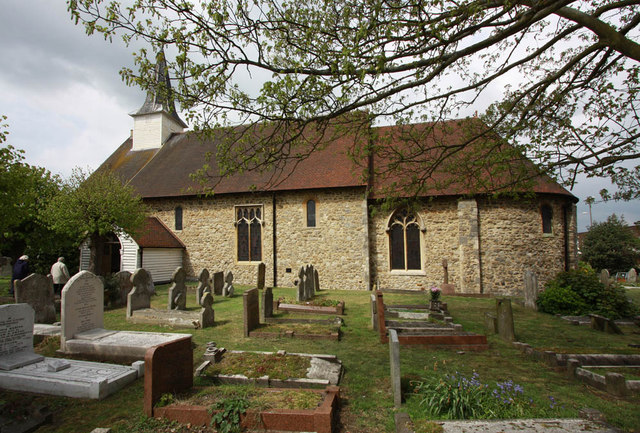 HADLEIGH is a small village and parish 2½ miles West North West of the fishing port of Leigh, and 6½ miles West South West of Rochford, containing 366 souls, and 1709 acres of land, extending southward to the marshes on the north side of Hadleigh Bay, opposite Canvey Island, in the estuary of the Thames.

The village is 1½ mile from the shore, and the surface of the parish rises in bold swells from the marshes, which are overlooked by the venerable ruins of HADLEIGH CASTLE, standing on the brow of a steep hill, commanding a fine prospect over the estuary into Kent.

This fortress was built in the reign of Henry III., by Hubert de Burgh, Earl of Kent, on whose disgrace, it was seized in 1268, and committed to the custody, of Richard de Thany. Though now almost a mass of ruins, and overun with shrubs and brushwood, it exhibits strong traces of ancient grandeur.

The area, enclosed by the walls, is nearly of an oval form, measuring about 110 paces in length, and forty 10 width. The walls on the north and south sides are strengthened by buttresses; and the cement, which seems to have sea-shells intermixed, is almost as hard as the stones themselves. The entrance is at the north-west angle, between the remains of two towers; and near it has been a deep ditch, extending along the north side. The principal parts now standing, are two towers at the south-east and north-east angles; these are circular on the outside; but the interiors, each consisting of five apartments, are octangular.

In the south-east tower, over what appears to have been a fire-place, are some thin bricks, disposed in the herring-bone manner. The inside or each tower has been cased with squares of chalk; a great part of which still remain. The thickness of the towers at the bottom, is 9 feet; the upper are about five.

As Hadleigh is not named in Domesday book, it is supposed to have been included in the extensive park belonging to the Honor of Rayleigh, in which there is still a large tract of thickly covered woodland, on the north side of the parish.

Henry de Essex, grandson of Suene the Saxon, was dispossessed of this and his other estates by Henry III., for his cowardice in the Welsh wars. From this period the manor of Hadleigh was held of the Crown by divers families, till it was finally granted, by Edward VI., to Richard Lord Rich, from whom it passed to the Earl of Warwick. It afterwards passed to the Bernard family.

Lady Olivia Bernard Sparrow is now lady of the manor, but part of the soil belongs to the Wood, Woodard, and other families. The Strangman family was seated and had large possessions here in the 15th and 16th centuries.

The village is pleasantly situated on the London and Southend road, and has a fair for pleasure and pedlery on the 24th of June. It anciently had a market on Wednesday.

The Church (St. James.) is an ancient Gothic structure, distinguished by the peculiarity of the east-end of the chancel, which is semicircular, in the form of a Roman basilica, and separated from the nave by a very heavy arch. The windows are small and lancet shaped, and that on the soutb is ornamented with several ancient coats of arms.

Hadleigh House Diocesan Commercial School, is in connexion with the Essex Board of Education, and the terms for borders under 10 years of age are £21, and for those above 10, twenty-four guineas per annum.

In 1820, Mr. Martha Lovibod gave, for the education and clothing of poor children of this parish £750, now vested in £781.5s.3d. three per cent. Consols, in the names of the Rector and the Archdeacon. The dividends are now applied in aid of the National School, and part of the income is given in religious books and clothing.

The children of Hadleigh are admissible to the Church School founded by Lady Sparrow, at Leigh.

Back to History of Hadleigh 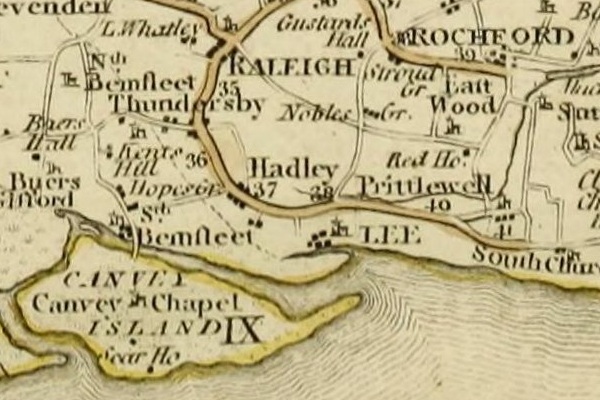 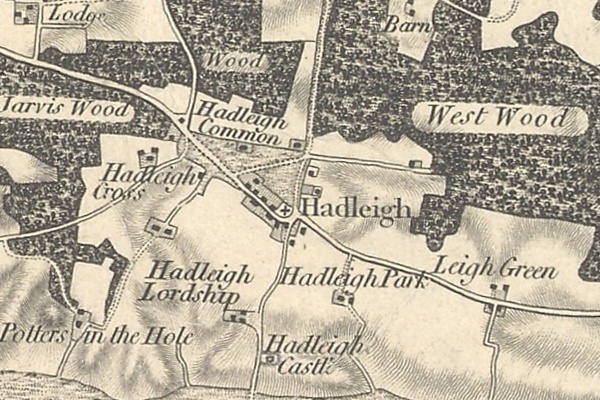