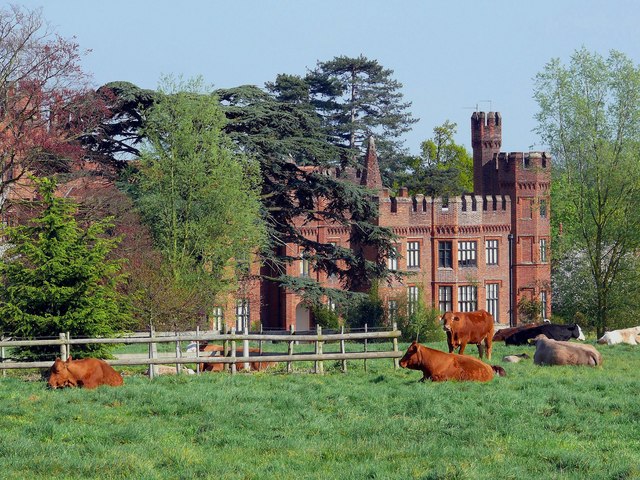 Faulkbourne Hall.
© Copyright John Webber contributor to the Geograph Project and licensed for reuse under this Creative Commons Licence

FAULKBOURN, a small parish of scattered houses, on the south-west side of the river Brain, 2 miles North West of Witham, has only 157 souls, and 1155 acres of land.

A Roman villa is supposed to have stood here, from the circumstance of a silver coin of Domitian having been found under an ancient wall, composed partly of Roman bricks.

The manor was held by Turbin, in the time of Edward the Confessor; but the Conqueror gave it to his nephew, Hamo Dapifer, together with numerous other lordships. Hamo's niece carried it in marriage to the Earl of Gloucester, whose son sold it to Richard de Lucy, to be held of the honor of Clare. In 1243, Richard de Rivers succeeded to the manor, which afterwards passed to the Bobun, Montgomery, Fortescue, and other distinguished families.

The Fortescues sold Faulkbourn, in 1637 , to Sir Edward Bullock, of Loftes, in Great Totham, who was knighted by James I.

His descendant, Jonathan Bullock, Esq., is the present lord of the manor, and owner of most of the soil, and resides at Faulkbourn Hall, a stately and spacious pile of red brick, of different eras, with embattled towers, turrets, etc., seated in a beautiful park of about 250 acres, rich in sylvan honours and embellished with deer, a fine sheet of water, statuary, etc., and one of the largest cedars in the kingdom, measuring nearly 19 feet in girth.

The north east angle of the mansion displays a massive and lofty tower, of curious architecture, supposed to have been built by the Earl of Gloucester, in the reign of Stephen, or Henry II., but the windows and outer walls have been renewed in the Tudor style.

The building forms three sides of a quadrangle, and the venerable north front is nearly covered with ivy; The west front has an entrance tower, and is terminated by smaller towers, surmounted by short crocketted brick spires.

Many improvements have been made in this stately mansion, by the family of the present owner, and it may now be considered one of the finest specimens of Gothic and ornamental brickwork in the kingdom. In several of the apartments are fine paintings by Vandyck, Vandervelde, Michael Angelo, and other eminent masters. 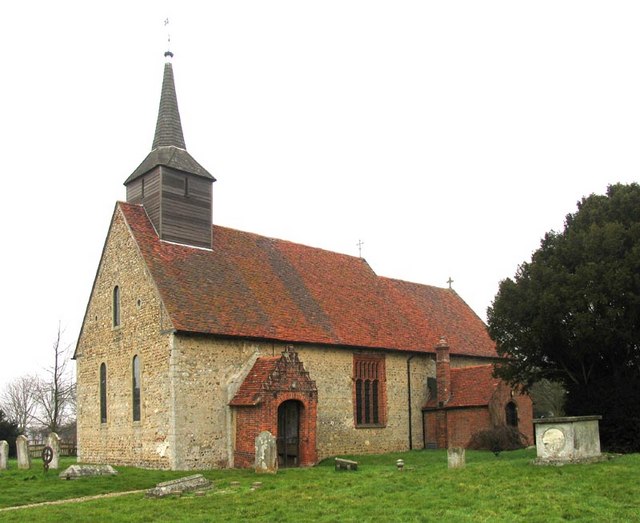 The Church (St. Germain,) stands on an eminence within the park, and is a small antique Norman structure, with a small belfry containing two bells, and crowned by a painted wooden spire. It is kept in excellent repair, and contains many memorials of the Fortescue and Bullock families.

There is a black marble monument of Sir Edward Bullock; and a costly one, of white marble, has a female figure as large as life, standing on a pedestal, with a scroll, on which is an inscription to the memory of John Bullock, Esq., of Dives Hall, who died In 1740.

Another marble monument ball, in alto-relievo, a weeping female figure, and busts of the late John Bullock, Esq., (who died in 1809,) and his lady.

For a weekly distribution of bread, the poor parishioners have the dividends of £200 Three per Cent., Reduced Annuities, purchased with £200 left by Capt. Hutchinson, in trust with the owner of Faulkbourn Hall, and the rector and parish officers. They have also a yearly rent-charge of 20s., left by the Rev. John Harrison, out of a house at Kelvedon. 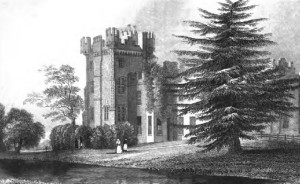 Back to History of Faulkbourne 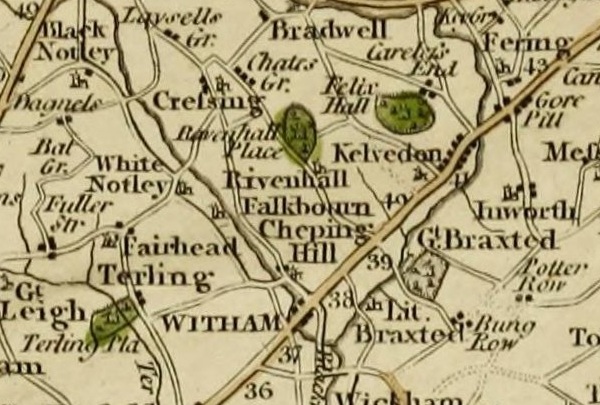 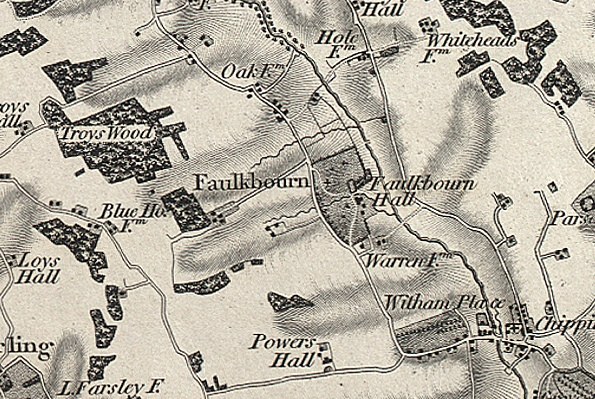