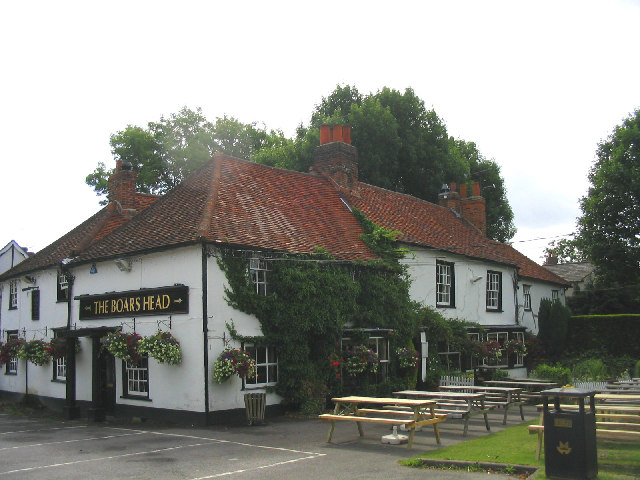 HORNDON, (EAST) a fertile and picturesque parish on the east side of the extensive park of Thorndon Hall, includes the pretty village of HERONGATE, which has many neat houses on the high road to Tilbury Ferry, from 2 to 4 miles South East of Brentwood.

It had 529 inhabitants in 1842, and has now about 600, and comprises 1449 acres of land, mostly belonging to Lord Petre, the lord of the manor, and partly to the trustees of the late Thomas Lowndes, Esq., and several smaller owners, mostly freeholders.

In the Confessor's reign, the parish was held by a thane, a priest, and a freeman; and at the Domesday Survey, it was mostly held by Suene of Essex and the Bishop of London.

Heron Hall had anciently a heronry, and was a seat of the Heron family. Thomas Tyrell, who obtained the estate by marrying the daughter of Sir William Heron, had license in 1363 to impark 400 acres round his mansion. The estate afterwards passed to the Earl of Arran, who married the daughter of Sir John Tyrell.

Heron House, a commodious farm house, stands on the site of Heron Hall, which was pulled down about 1790, except two round towers, which yet remain.

An estate, called Abbots, was given by Hugh de Nevill,in 1195, to Waltham Abbey; and in 1544, it was sold to Sir W. Petre, an ancestor of its present owner, Lord Petre, of Thorndon Hall, in the adjoining parish of West Hordon. 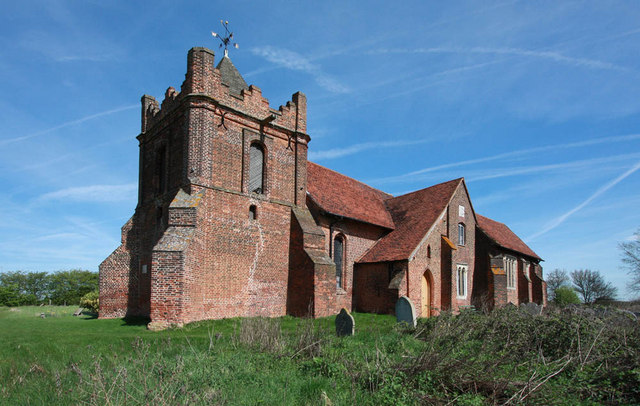 All Saints' Church, East Horndon.
© Copyright John Salmon contributor to the Geograph Project and licensed for reuse under this Creative Commons Licence

The Church of East Horndon stands near the north-east corner of the park, and is an irregular brick building, dedicated to All Saints, and evidently constructed at different periods. The tower at the west end is strengthened by massive buttresses.

The chancel has an octagonal ceiling of wood, and is ornamented with carved shield of arms, roses, and other figures. On the south side are chapels of the Tyrell and Petre families; and in the former, on a flatstone, is a quaint Latin inscription, in memory of Sir John Tyrell, who suffered greatly for his adherence to Charles I.

On the north side are also two chapels, one of which much ornamented and contains an ancient mutilated monument dated 140O, and supposed to be in memory of one of the Tyrells. The font is a square massive stone, carved with intersecting arches and other ornaments.

Back to History of East Horndon 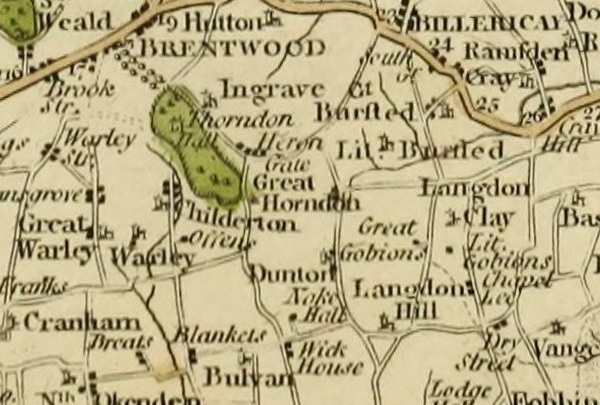 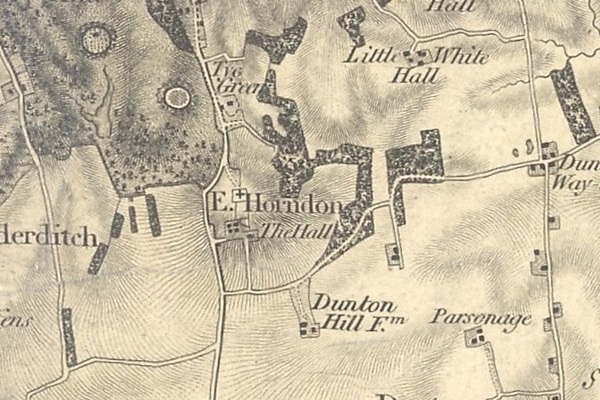