Note: Because of the size of the entry, it has been edited.

CHELMSFORD, the county town, is pleasantly situated near the centre of Essex, at the confluence of the rivers Chelmer and Can, the former of which is navigable for small craft from its junction with the Blackwater, at Maldon, about ten miles to the east.

It is the handsomest, and one of the most busiest, though not the largest market town in Essex; and in it are held the assizes, and other general courts, etc., of the county, for which its central situation, with good roads diverging in all directions, is well adapted. It has a station on Eastern Counties Railway, and is on the high road to Colchester, Braintree, Suffolk and Norfolk. It is 29 miles North East of London.

The town is in three divisions, connected by good bridges, viz: Chelmsford, betwixt and at the confluence of the rivers Chelmer and Can; Moulsham, on the south side of the latter; and Springfield, on the north side of the Chelmer.

The town has been greatly improved during the last ten years; and Conduit square and High street, (where the market is held,) as well as the other principal streets, are well paved and lighted with gas. The houses are generally modern, and many of them have gardens behind them, extending to the rivers. There are in the town many large inns and taverns, and well-stocked shops, and some of the latter have handsome plain glass windows. 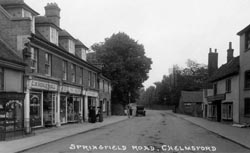 The Eastern County Railway was opened in 1843, and crosses the western part of the town and suburbs, by a viaduct of 18 brick arches, each 30 feet in span, and 45 feet in height, to the top of the parapet. The Station is conveniently placed between the two lines of rails, and approached by a double staircase from the arch which crosses Duke street.

Until 1839, the town was closely encompassed by entailed land, belonging to the Mildmay family, but in that year the entail was cut off, and about 400A. of land, adapted for building ground, was sold for about £80,000, in lots to suit purchasers.

A new road, about a mile long, now called the New London road, was set out through the property in Moulsham hamlet; and it has since been continued into the centre of the town, by a company of shareholders, who erected a handsome cast iron bridge over the river Can, and formed New Bridge street, at the cost of more than £5,000; the old Theatre, and a number of houses, etc., having to be purchased and removed, and about 10,000 square yards of earth to be carted for the formation of this grand entrance to the town.

In 1841, another company erected, in the New road, at the cost of £2,500, an elegant building in the Grecian style, called The Institute; since sold to Messrs. J. and E. Copland, but still partly occupied by the Literary and Mechanics' Institution. Since that period, the lower part of the road has been lined with well-built shops and private houses; and in New Bridge street an elegant row of houses called Museum Terrace, has erected by Mr. G. Meggy, in the Roman style, with Corinthian pilasters.

New chapels for the Roman Catholics, Independents, and Baptists, and several highly ornamental mansions, have recently been erected in other parts of the road; and many of them, as well as the new bridge, are honourable testimonials of the architectural skills of Mr. Fenton. The Half Moon public house still obstructs the entrance to High street, but it is hoped it will soon be removed. A little below the new one, another Bridge crosses the river Can, and connects High street and Moulsham street. This is a substantial stone bridge of one broad and handsome arch, built in 1787, on the site of the original bridge, which was erected by Maurice, Bishop of London, about the year 1100, and consisted of three small arches.

The Shire Hall is at the head of High street, but the large County Goal, the County Police Depot, and the wharfs, are on the opposite side of the Chelmer, in Springfield, which is a handsome suburb, with many good houses, and is connected with the town by town bridges, crossing two branches of the river, which insulate the small island called Mesopotamia.

One of these bridges (nearest High street,) is a neat iron structure. The town is approached on all sides by a gentle descent, but the principal streets are nearly on a level. The surrounding country affords a pleasing diversity of scenery, and is very abundant in agricultural produce; - the soil being generally a deep rich loam, intermixed with veins of gravel. 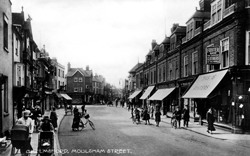 [...] Chelmsford parish comprises the manors of Bishop's Hall, Moulsham Hall, and most of Bekeswell or Becksfield. The manorial mansion of Bishop's Hall, has long been occupied as a farmhouse, and stands on the banks of the Chelmer, half a mile north of the town.

Moulsham Hall was built by Thomas Mildmay, Esq., about 1564, soon after he had obtained grants of this and neighbouring manors, from Queen Elizabeth. It was rebuilt in a magnificent manner, about 1730, by Benjamin Mildmay, Earl Fitz-Walter, the third and last of the family who held that earldom, as descendants of Frances Fitzwalter, who married Sir Thomas Mildmay about 1630.

The hall is described as having been a splendid mansion, with a fine collection of pictures, but was taken down more than thirty years ago. Part of the stabling remains, and is used as a dwelling, and a portion of the garden wall forms one of the boundaries of a nursery.

Guy Harlings, near the church yard, is one of the best houses in Chelmsford, having been new fronted by its present owner and occupant, Dr. Badeley. It was built by Sir John Comyns, on the site of an ancient mansion which was erected soon after the Conquest, by the Norman knight, Guy de Harling, and was afterwards a seat of the Wiseman family. In the hall are many ancient carvings, which undoubtedly belonged to the original mansion. The grounds are tastefully laid out, and encompass a fine sheet of water.

In a survey dated 1591, the manor of Moulsham is described as being held of the Crown in chief, and having more than 200 tenants, holding by a free deed, and copy of court roll; and as containing about 1,300 acres of enclosed lands, and about 500 acres of Galleywood Common, which lies south of Moulsham, and is mostly in the parishes of Great Baddow, Stock, and Margaretting. Part of this common has been long enclosed.

A portion of it, about two miles South of the town, forms Chelmsford Race Course, and commands extensive views of the surrounding country. There is an oval course of nearly two miles, and a straight course of one mile. The Races are held annually, on or about the second Tuesday and Wednesday in August, and are well attended, rarely wanting either genteel company, or plenty of good horses. 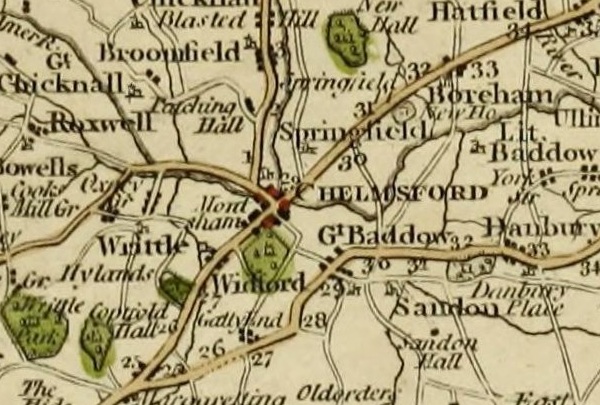 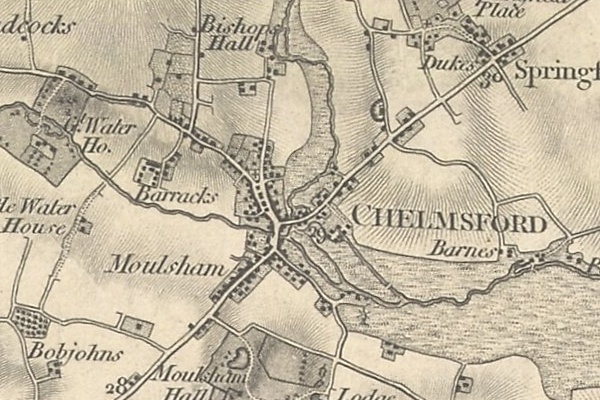 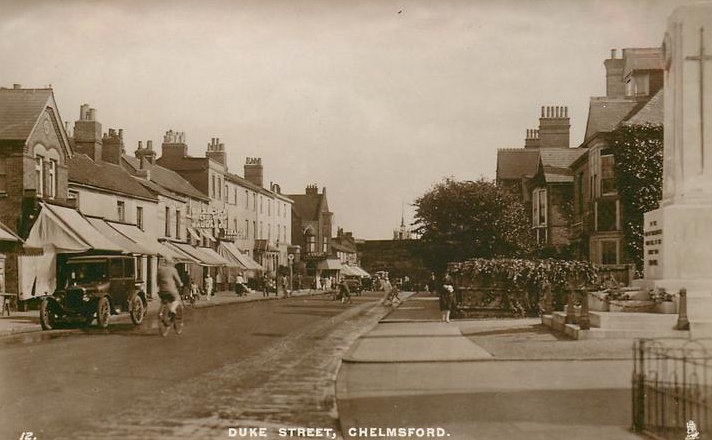