Built in 1895, the church is listed as being of 'special historical interest'. Its architecture is recognised to be a fine example of the Arts and Crafts Movement. There has been a St Nicholas' Church in the parish for over 600 years and there is some suggestion that there was one before the time of the Domesday Book. The present church containings many items from the earlier churches.

The earliest record of a church in Kelvedon Hatch is 1372, although there is reference to a priest in the parish in 1344, and Feet of Fines makes reference to an advowson in 1254 "Manor of Kelewedon with appurtenances and the advowson of the church of the same Manor."

Until the 20th century, Kelvedon Hatch was a rural parish with a sparse population. In the south of the parish was an area of common land around which were a few scattered cottages. The church was situated two miles to the north of the present church in the grounds of Kelvedon Hall.

It is possible that there was a Saxon church. The dedication to Saint Nicholas, the patron saint of sailors, may have arisen from the association with the owner of Kelvedon Hall manor referred to in the Domesday Book.

There are only a few clues as to what the medieval church looked like.

In 1511 the will of the rector Rankyn Bolles wanted "to be buried under the image of St Nicholas." this was probably a medieval wall painting showing a scene from the saint's life.

Edward VI's Act of Uniformity required a inventory of churches (1553). Commissioners sent to the church listed the items held by the parson and churchwardens.

In 1638 the archdeacon made a visit and ordered changes to the interior of the church:

The Advowson (right of presenting the next incumbent) descended with the manor of Kelvedon Hall. In 1538 Kelvedon Hall was purchased by John Wright and it was to remain in the family for the next 400 years. Their right to the Advowson, however, was lost when they converted to Catholicism in the early 17th century. Other individuals were granted the Advowson.

By 1750 the medieval church was "neglected by the parishioners and unfit for services". It was decided to rebuild the church at a cost of £1,681. The parish set about raising the money which included a church brief and sale of the four bells in the steeple, to be replaced by just the one.

The new church was re-opened in 1753. Built of brick in the Georgian classical style with Venetian style windows, it contained a west gallery, and a three-tiered pulpit. The last two items were removed when the church was refurbished in 1873. New pews were also installed.

The building of the new church
By the late 19th century, the centre of the parish had shifted away from Kelvedon Hall. The village was expanding on the former common land, and the new school building was also being used for services and prayers.

In 1893 the Home Office closed the churchyard of the old church as it was full. The parishioners now had to find another burial ground. Fortunately, the Rev. Royds of Brizes donated land for a new burial ground nearer to the village, providing a church was also built there. Led by the rector, Rev. David Peregrine, the parishioners launched a fund-raising campaign to raise £2000 needed to build the new church. Donations, rummage sales, fetes and pound sales raised the required amount - a large sum for a community in the depths of an agricultural depression.

Building commenced in September 1894 and the church was consecrated on 1 November 1895. Parish Magazine report on the laying of the Memorial Stone for the new church.

The builders of the church 1895

The new church under construction - 1895

Architecture
The church was designed by John Newman F.R.I.B.A., who lived in the village. His design shows the late Victorian interest in the skill of the craftsman and the rejection of industrialisation. It is built of red brick, left exposed internally, and consists of chancel, nave, organ chamber, vestry and south porch. Above the porch is a small bell tower with a louvred belfry and shingled spire. The impressive hammer beam roof is exposed. The pulpit, lectern, chancel screen, gospel lights and the font cover are fine examples of wrought-iron work.

The font is late 14th-century and was brought from the old church. There is a small carved face in the upper panel of the font facing east. The pews and bell are also from the old church. The bell, cast circa 1450, is inscribed 'Sancte Andree ora pro nobis' (Saint Andrew pray for us) and probably originated from another church - as yet unidentified.

The silver communion plate, consisting of a chalice and paten, was presented to the church by members of the Luther family of Great Myles's and bear the date 1674.

The window immediately behind the altar contains glass from the old church. The triple window above the altar, representing Our Lord in Glory, with St John and St Paul on either side, was given by a former rector, the Rev. William Orme, to commemorate the Silver Jubilee of Queen Elizabeth II. On the south side of the nave, the Rev. and Mrs Orme are themselves commemorated in a window which depicts St Cecilia. On the same side, a small window in memory of George, 8th Lord Rodney, and another window to the Hon. Simon Rodney who lived at Brizes Park; opposite, is a window to the memory of his wife Sadie. Also on the north side are windows commemorating Mr and Mrs Bertram Jones, Mr John Page Fitch, Mrs Betty Jeffreys and her son David Jeffreys, and Mr Ted Fulcher. 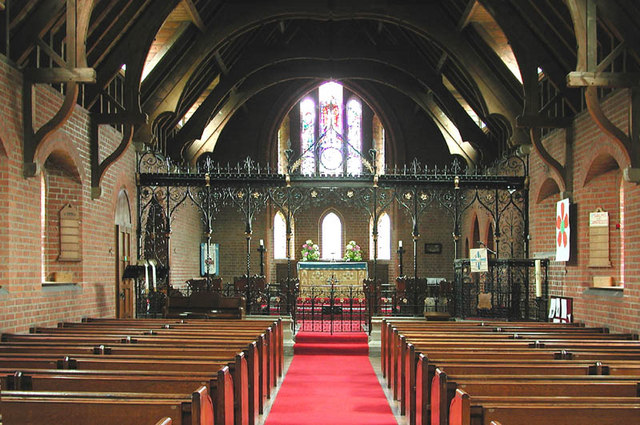 Brass memorials to members of the Wright and Luther families are to be found on the walls. These were recovered from the old church, as were a number of gravestones now in the churchyard. On the wall to the left of the entrance door is a list of the rectors since 1372.

Meanwhile the old church fell into disuse and disrepair. The cost of keeping two churches in good condition proved too much for the parishioners. The Church Commissioners have now passed the ruins over to the Kelvedon Hall estate.

Back to History of Kelvedon Hatch

Go on a guided tour of Kelvedon Hatch, Essex, during the 19th and early 20th centuries. With the help of photographs, newspapers, parish records and census returns, the story of each house is revealed, as are the lives of some of their occupants.

It was a parish of many contrasts: from wealthy land-owners living in grand Georgian mansions with numerous servants, to agricultural workers struggling against poverty in overcrowded and dilapidated cottages. Discover how the landscape changed after the common land was enclosed, and how farmers struggled to cope with the agricultural depression. Find out about the role of the parish in WW1 when it was at the front line of Britain's fight against the Zeppelins. See how the new school was established and functioned, and why a new parish church was built. There are stories of crime, bankruptcy, poverty, scandal, revenge, leisure and migration.

Even if you have never been to Kelvedon Hatch, with the help of detailed maps and photographs, you will find yourself immersed in its history.

Published by History House and available in paperback or ebook.

and other online bookstores.