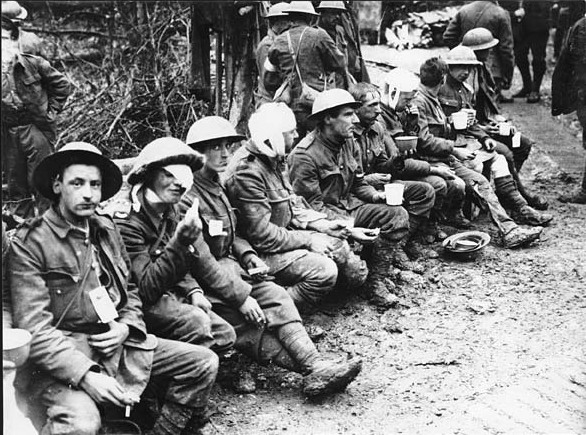 Wounded soldiers at a rest station.
Image courtesy of the National Library of Scotland on Flickr NKCR

A look at World War One military records and how they can help you research your ancestors.

The centenary of World War One 1914 -1918 sparked the desire in many people to find about their ancestors' role in the First World War. This article looks at the available British Armed Forces Service Records for the period 1914 - 1920 and how they may be accessed by those researching their family history.

Many of the records are now available online, while others are stored in archives which will require a visit to continue the research. Unfortunately, some Army records were destroyed by enemy action in the Second World War.

The National Archives hold 5.5 million medal cards for members of the British Army and Royal Flying Corps who were awarded campaign medals. The cards only provide a very brief details of service: army number, regiment, dates, and medals awarded. The campaign medals were 1914 Star, 1914/15 Star, British War Medal, Victory Medal, Territorial Force Medal, and The Silver War Badge. The National Archives provide a very comprehensive guide on how to search for the cards and a guide to their contents. It costs £2 to purchase a copy of the card.

The biggest problem with the cards is that there were no strict rules as to how the names were to be entered on the cards. Often middle names are not included, or only initials are supplied. Prior knowledge of the regiment in which they served may be required to aid identification of the correct card.

The medal cards are also available on Ancestry.co.uk in the British Army WWI Medal Rolls Index Cards, 1914-1920 and on Findmypast.co.uk.

Navy campaign medal cards are available in microfiche at the National Archives, or on Ancestry.co.uk in the Naval Medal and Award Rolls, 1793-1972

Gallantry awards and mentions in dispatches are listed in London Gazette, however, they are so numerous that searching for the them is problematic. It may be easier if you are able to attend the National Archives to search indexes kept by the Army and Navy. A guide on how to do this appears on this National Archives page.

British Army WWI Service Records, 1914-1920, were subject to enemy action in World War Two and many were destroyed. The surviving service records of non-commissioned officers and other ranks who served in WWI and who did not re-enlist in the Army prior to World War II can be found on Ancestry.co.uk and Findmypast.co.uk. The type of information contained in these records includes: name of solider, age, birthplace, occupation, marital status, and regiment number.

British Army WWI Pension Records, 1914-1920, are service records of non-commissioned officers and other ranks who were discharged from the Army and claimed disability pensions for service in WWI. These were also men who did not re-enlist in the Army prior to World War II. Again available at Ancestry and Findmypast.co.uk. The type of information contained in these records includes: name of solider, age, birthplace, occupation, marital status, and regiment number.

The database Prisoners of War, 1914-1918 on Ancestry list those British Officers captured and placed in P.O.W. camps.

Another possible source of information is the Prisoners of War Interview Reports at the National Archives. Reports on over 3,000 British and Commonwealth prisoners of war captured during the First World War.

The National Archives provides a guide to their various holding for the Merchant Navy.

Formed in April 1918, the Royal Air Force (RAF) took over from the Royal Flying Corps and the Royal Naval Air Service. The National Archives hold the service records of 99,000 men. Some retrospective information on their service in the earlier corps or service is also detailed.

The National Archives provides a guide to seeking information on World War One war dead.

The Commonwealth War Graves Commission's "Debt of Honour Register" is a database which lists the 1.7 million men and women of the Commonwealth forces who died during the two world wars and the 23,000 cemeteries, memorials and other locations worldwide where they are commemorated. Information includes includes regiment, and place of burial. It can also include some personal information.

Database of over 230,000 soldiers' Wills many from the First and Second World Wars. Surname and date of death required. Searches can be accessed at the Probate Sevice: https://www.gov.uk/probate-search#before-you-start. Each Will costs £6.

Many service personnel were mentioned in national and local newspapers and these can be a good source of information. See the article on Newspapers Archives.

World War One army unit war diaries are now available on Ancestry.co.uk for France, Belgium and Germany, 1914-1920; and Gallipoli and Dardanelles, 1914-1916. If you know the name of the regiment your ancestor served in during World War One then you can now find out some background information on your relatives' experiences during World War I. The war diaries include daily reports on operations from the Western Front and the Gallipoli Campaign. You'll be able to find out where your ancestors regiment was and what it was doing at particular periods during the war.

The level of detail varies depending on who was filling in each diary - but at times you can read not only hour-by-hour accounts of some of WWI's largest battles, but also accounts of day to day life under constant shelling, casualties, and mundane facts such as what the weather was like, and how morale was holding up. Names are mentioned, but the diaries are not indexed. That is the subject of an ongoing crowd sourcing project Operation War Diary.