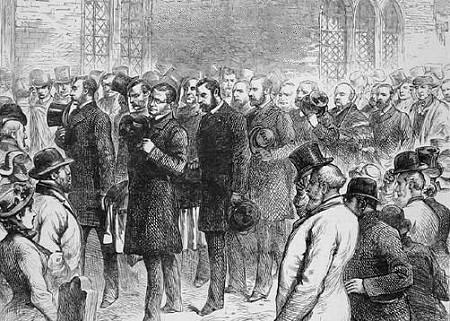 The re-entombment of the great physician at Hempstead.

William Harvey (1578 - 1657), famous for his discovery of the circulation of the blood, was buried in the Harvey family vault at Hempstead in 1657.

In 1859, two hundred years after his death, two Fellows of the Royal College of Physicians visited the vault and discovered that it had been flooded on several occasions. They found '46 coffins placed on the floor, more or less irregularly'. The leaden coffin which contained Harvey's remains they found in the more distant part of the vault.

They discovered that the coffin had collapsed in part. The result was that rain beating through an opening in the vault had found its way into the coffin and that it was filled with dirty water. The College offered to repair the coffin and to move it elsewhere in the vault. The Harvey family however, refused their offer, and paid for the repairs themselves.

Another visit in 1883 by College Fellows found the vault in 'lamentable condition'. The college came to the conclusion that this was no proper way that the discoverer of the circulation of blood should be treated and a more suitable resting place should be found.

This time the family consented. A faculty approving its move was obtained and a white marble sarcophagus was made. It was placed on the floor of the Harvey Chapel which stands above the vault and which adjoins the church.

Surrounded by monumental tablets to others in his family, the sarcophagus was engraved with the words 'The remains of William Harvey, discoverer of the circulation of the blood, were reverentially placed in this sarcophagus by the Royal College of Physicians of London, in the year 1883'. 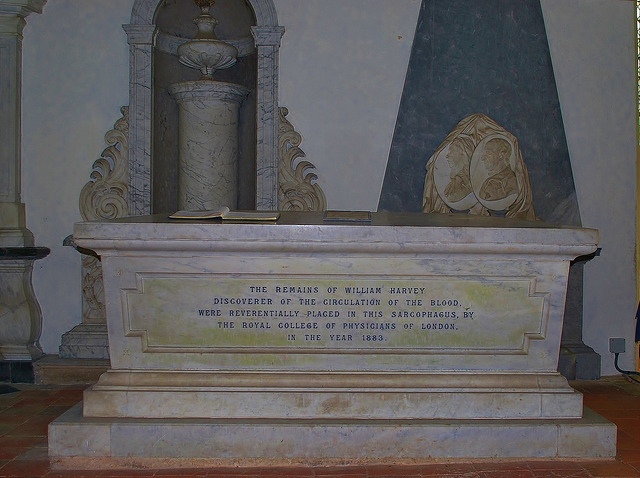 The re-entombment took place on 18 October 1883 and the ceremony was attended by many Fellows of the Society who had made their way from London on a special train. The church presented a very dilapidated site. The church tower had collapsed in the previous year.