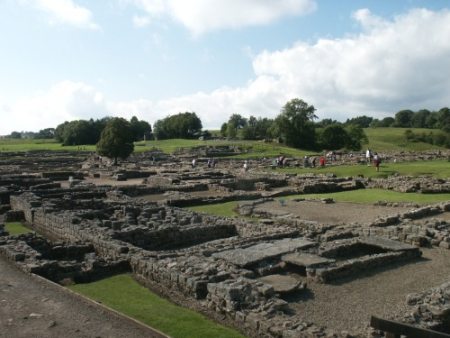 A look at the fascinating Roman fort on Hadrian's Wall.

Vindolanda is a Roman fort and settlement just to the south of Hadrian's Wall in Northumbria, Northern England. It contains the largest collection of Roman buildings to be found anywhere along the Wall.

Vindolanda is permanently under investigation by archaeologists and it is estimated that there is sufficient work for them for the next 150 years or so. The thousands of objects they have already discovered reveal a fascinating glimpse into the life of the Roman soldiers and civilian inhabitants who lived in the fort over the 350 years of its Roman occupancy, and into the following two centuries when the local inhabitants struggled to carry on without the Roman army's protection.

The most famous discovery so far are the so called Vindolanda Tablets. Scores of thin wooden writing tablets, written on with ink and quill pens. They form the earliest written records to be found in Britain. They cover a wide range of topics, many in connection with the day to day running of a military base: duty rotas, stores and supply lists, requests for leave, army reports. The tablets also give a glimpse into everyday life with personal correspondence, shopping lists, and even a birthday invitation.

The fort was built on the east-west supply route which ran just behind Hadrian's Wall. Built first in timber and earth, it was later built in stone. Archaeologists believe that there are the remains of ten forts in all. Buildings found so far include the fort walls, bath houses, granaries, officers' accommodation, barracks, a temple, and civilian housing, all served by paved roads.

If you visit the site between April and September and you can watch the archaeologists at work. They are very willing to stop and talk about the site and their work. If you are interested in archaeology then they are always looking for volunteers to help out on digs.

Near the fort is a museum where you can see in an easily accessible and well described exhibition displaying some of the finds made on the site including glass, jewellery, shrines and other monuments, military equipment, clothing, tools, cooking utensils, and a host of other objects from the everyday life of a Roman. Many of these objects have not been found elsewhere in world because the soil at Vindolanda has unique preservation qualities.

For an aerial view of the site visit Google Maps.