What servants would you find in a Victorian household? 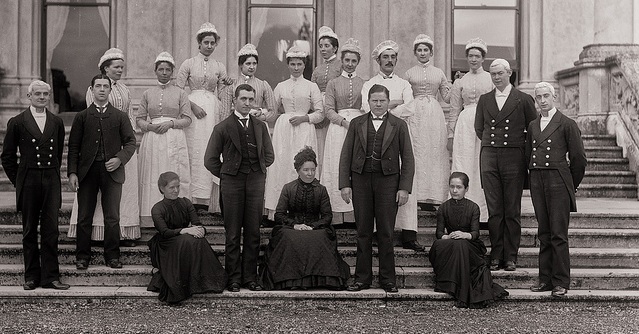 Did your ancestor work below stairs? From butlers to scullery maids.

The Victorian period in Britain saw a peak in the numbers of servants employed in households. All upper class houses had several servants, and most middle class households aspired to have at least one or two servants. In 1871 over 4% of the population was employed 'in service', the vast majority of them women.

So what roles did these servants perform? (Cartoons below by Punch Magazone which often commented on the relations between servants and their employers).

Like the rest of Victorian society, the servants were part of a strict hierarchy. Their work was very regimented and hard. Working hours were long and time-off very rare. However, there were rewards, such as good wages compared with other jobs like agriculture, with board and lodging included.

The principal male servant was the Butler. He supervised other male servants, looked after the wine cellars and served wine at dinner, and attended to the needs of the family and guests in the dining and drawing room.

The Housekeeper was the principal female servant. She was also in charge of the household accounts, tradesmen's bills, orderly running of the house, and ensured that the house was clean. She was also responsible for the servants' accommodation.

The Valet attended to the personal needs of the master of the house. Setting up his washing and shaving equipment. Preparing his clothes and helping him dress, and dealing with any other tasks which his master required. 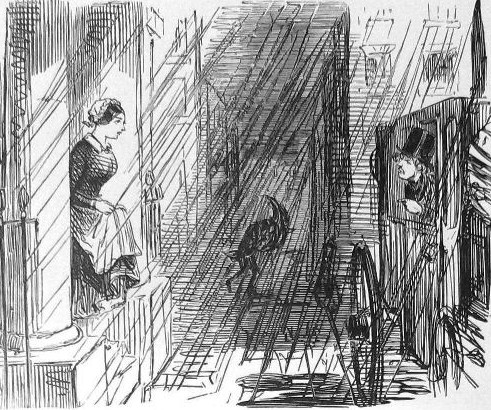 Caption: Extreme Delicacy. Esquire in Cab: Aw-be kind enough, if you please, to fetch -aw-an-aw umbrellaw, and hold it ov-aw me while I-aw-get out.
Image from Punch 1848. PD

First thing in the morning the Footman cleaned the boots and shoes, and all the household silver. He set the table for meals and assisted the butler, answered the door, and attended to various other tasks in the house.

The Lady's Maid was the female equivalent of the valet. She attended to all the needs of her mistress, and according Mrs Beeton Book of Household Management, hairdressing was the most important task.

For the Housemaids and Under Housemaids, the main task was cleanliness and good order throughout all the rooms of the house. Rising early, the first task was to clean and light the fires, and empty chamber pots. They then changed bed linen and cleaned through the house. It was hard work over long hours.

The Laundry Maid washed the family's linen in the washing house, and then ironed them in the ironing and drying room. 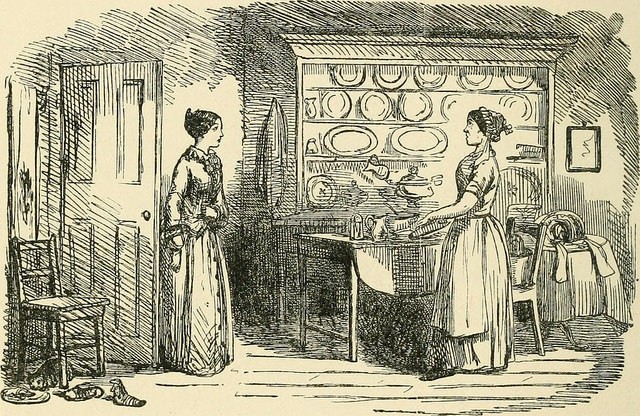 Caption: Cook: Well, to be sure, Mum! Last place I were in Missis always knocked at the door afore she come into the kitchen!.
Image from Punch c.1850, courtesy of University of California Libraries on Flickr - NKCR

The Cook was responsible for the kitchen and the preparation of the meals. She was assisted by Kitchen Maids, and the Scullery Maid who would carry out menial kitchen tasks and do the washing up.

The Houseboy, a young boy of perhaps 14, waited on the other servants. 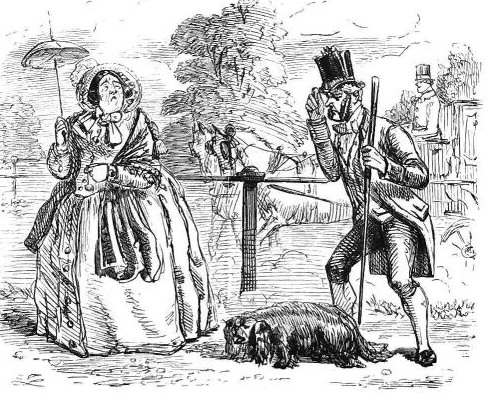 The Coachman supervised the stables and drove the coach. The Groom and Stableboy ensured that the horses in the stables were well looked after and ready should the master wish to ride or travel in his coach.

For an account of a servant's life in the early 19th century you may be interested in the following book by Thomas Cosnett available free on the Internet Archive: The footman's directory, and butler's remembrancer, compriising, hints on the arrangement and performance of their work, rules for setting out tables and sideboards, the art of waiting at table, and conducting large and small parties, directions for cleaning plate, glass, furniture, clothes, and all other things which come within the care of a man-servant, and advice respecting behaviour to superiors, tradespeople and fellow-servents