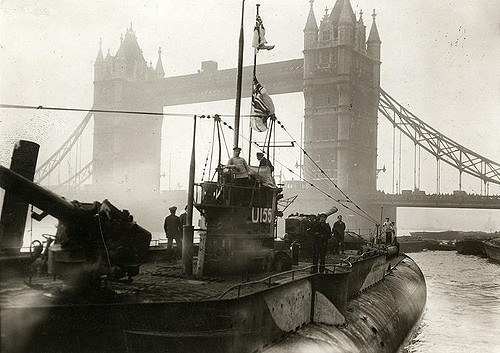 The day a U-Boat was moored by the Tower of London.

This rather curious image showing the German U-Boat 'U 155', better known as Deutschland, moored by Tower Bridge, London, is an example of just one of the surrendered German submarines which were taken around various British ports and seaside resorts for public display after the end of the First World War.

Deutschland sank 43 allied ships during the war, and even in peace time, this U-Boat still brought death and financial ruin.

Under the terms of the armistice signed by Germany, it was required to surrender its submarines to Britain. On 21 November 1918 the first batch of 20 submarines made their way across the North Sea to the British coast.

35 miles of the coast of Essex, they were met by a small flotilla of British warships commanded by Rear Admiral Sir Reginald Tyrwhitt. They were escorted towards the Port of Harwich, and before entering the port, British seaman boarded and took control of the submarines before taking them into the harbour.

The German crews were taken back to their own country in transports. The Times newspaper reported that there was little ceremony and there was no jubilation or scenes of cheering when the White Ensign was raised over the conning tower of the vessels.

In the following days, 122 submarines and associated craft of the fleet were taken into Harwich.

The Admiralty decided that a number of the U-Boats should be taken around Britain and displayed to the public. Among these places were Portsmouth, Devonport, Great Yarmouth, Cardiff, Bristol, and London, which was the destination of Deutschland.

Deutschland was originally a merchant navy vessel famous for having made a trans-Atlantic voyage to New York in June 1916 before America had entered the war. It was converted to a military submarine in February 1917 and sank 43 ships totalling 120,441 tons. [1]

Deutschland was towed up the Thames on 2 December 1918, and after a collision with a passing steamship during which both vessels received minor damage, it was moored in St Katherine's Dock next to Tower Bridge. Admission to view Deutschland cost 1 shilling.

Deutschland was sold by the Admiralty in March 1919. It later passed on to a company controlled by Horatio Bottomley, a Member of Parliament. Deutschland was taken around Britain for exhibitions in Great Yarmouth, Southend, London, Ramsgate, Brighton, and Douglas, Isle of Man.

The exhibitions were not a financial success with a loss of £15,000, and in September 1921, the vehicle was finally taken to be broken up at Birkenhead. Even then it still was responsible for deaths. During its breaking-up an explosion killed five young fitter's apprentices. Meanwhile, Bottomley found himself on trial at the Old Bailey for fraud and several associated matters and he was made a bankrupt. He was sentenced to seven years imprisonment.