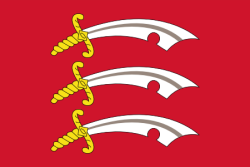 The history of Essex contains some interesting and surprising facts, here are some examples.

Britain's first experimental radio broadcasts were made from Marconi's New Street works in Chelmsford in 1920.

The Barley Barn at Cressing Temple is the oldest timber-framed barn in the world - dated to 1206.

Flying from Stansted Aiport? Then you are taking-off over the remains of a Late Iron Age and Middle Bronze Age settlement.

The oldest church in England is St Peter's Chapel in Bradwell-on-Sea, built where St Cedd landed in 654 on his mission to convert the East Saxons. Bradwell On Sea, The Chapel Of St Peter On The Wall c.1960
Reproduced courtesy of The Francis Frith Collection.

The establishment of a gunpowder factory at Waltham Abbey led to the town being at the centre of over 300 years of explosives production and research.

At Great Dunmow the 'Dunmow Flitch' is perhaps oldest recorded competition in the world - unless your wife disagrees with you on that.

In the contest for Britain's oldest door, St Botolphs Church in Hadstock and Little Totham's All Saints Church are lined up against Westminster Abbey. The contest is open to much debate as archaeological studies cannot always place an exact date on the creation of objects.

The name Essex originates from East Seaxe or East Saxons - The Land of the East Saxons. The county emblem has three seax on it. A seax was a single-edged knife or sword.

Tilbury was where Queen Elizabeth I spoke these memorable words to the troops assembled to fight the threatened Spanish invasion which was being brought by the Spanish Armada: "I know I have the body of a weak, feeble woman; but I have the heart and stomach of a king - and of a king of England too, and think foul scorn that Parma or Spain, or any prince of Europe, should dare to invade the borders of my realm;" At Greensted, the church's wooden walls date from the 11th century.

Between 1560 and 1680 in Essex, 545 people were accused of witchcraft and at least 74 are known to have been executed at the Essex Assizes. Matthew Hopkins, known as the 'Witchfinder General', was a lawyer from Manningtree.

Six cockle boats from Leigh-on-Sea took part in Operation Dynamo to rescue the troops from Dunkirk during WWII. Their crews rescued over a 1,000 men and transferred them to larger ships offshore. One ship and its crew was lost on their return journey.

Largest surviving post mill in Essex is at Aythorpe Roding. The windmill was built in 1779.

Bradfield Church contains a memorial to Squadron Commander RN Edwin Harris Dunning who was first pilot to land an aircraft on a moving ship on August 2nd 1917. He died five days later making a second attempt.

At Birdbrook, Martha Blewitt, who died in 1681, had nine husbands - the last one outlived her; while Robert Hogan in 1739 married his seventh wife.

The churches of Willingale Spain and Willigale Doe share the same churchyard.

Brentwood is where the Peasant's Revolt began in May 1381.