The lions in Trafalgar Square 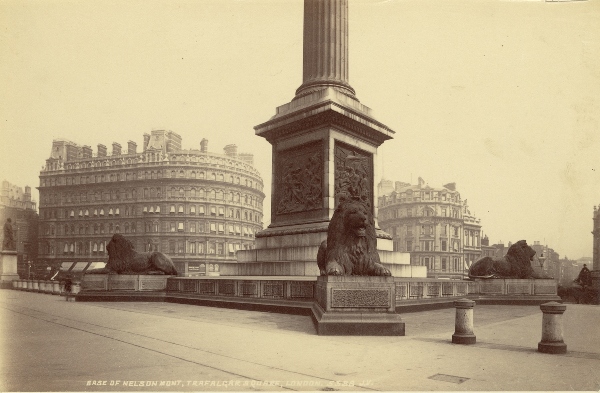 A story of delay and financial problems.

As tourists clamber over the four lions at the base of Nelson's Column in Trafalgar Square, London, few know that their creation was beset by delays and prevarication.

When planning the design of Nelson's Column, Nelson's Testimonial Committee had included four lions at the corners of the plinth. It was intended that the lions were to be in stone or granite some 20 feet long, although this idea was not met with universal agreement. John Graham Lough was to be asked to be their sculptor, but the lack of funding and artistic arguments prevented their execution at the same time as the erection of the monument which commenced in 1839.

The matter dragged on until 1846 when sufficient funds became available to commission the four bas-reliefs at the base of the column. This image shows Nelson's Column before the lions.

In 1858, 12 years later, the House of Commons allocated £6000 for the completion of the lions and the intent was to invite six sculptors to submit models and for one of them to be selected.

The Board of Works, however, had different intentions and they announced the appointment of Sir Edwin Landseer (1802-1873) to carry out the commission. This raised many an eyebrow for although Landseer was known best for his painting of animal subjects: stags, dogs, hunting scene, and was favoured by Queen Victoria who commissioned him to paint her and her family, his skill and knowledge of sculpture was questionable.

The Times wrote that while acknowledging his skill at painting, it observed that "Sir Edwin never had a chisel in his hand in his life, and never yet, we believe, attempted to model anything." 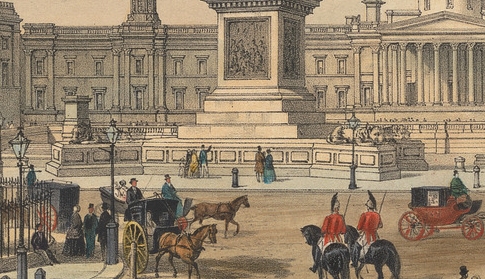 This print from 1852 shows lions in place, however, at this time the pedestals were still empty.
Image courtesy of Yale Center for British Art PD

There were then further delays caused by Landseer's ill-health and financial problems. Questions were asked in parliament, newspapers referred to 'a scandal' and 'a national disgrace', and the lions became the subject of jokes. There was confusion over their costs as an additional £11,000 was required for their casting which was to be carried out by Baron Carlo Marochetti, himself a sculptor. (Image of Landseer in Marochetti's studio). 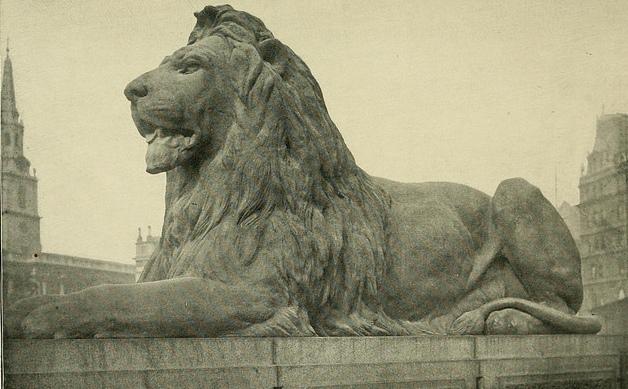 One of the lions
Image from 'Landseer: a collection of fifteen pictures and a portrait of the painter', 1901 courtesy of Webster Family Library of Veterinary Medicine on Flickr

Finally, on 31 January 1867, the bronze lions were unveiled in Trafalgar Square. The Times, which had been so scathing a few years earlier, was full of praise, but some critics disliked them. Reynolds's Newspaper wrote "Although admirable in most respects, has certainly some glaring defects". It believed that their character was more like a sphinx than a lion. Other critics were just thankful that the whole affair was finally over.