When was London's Underground nicknamed the Tube?

A trip down the Tube.

Tourists are sometimes baffled when the London Underground is referred to as the Tube, especially when some of it is above ground and sections of it created by the cut and cover method.

But the nickname seems rather obvious when you read the history of the Underground and the technology involved in its construction.

The idea of developing a new transport system using pneumatic tunnels or tubes was proposed during the 19th century. The practicalities of such schemes were often beyond the technology of the time. However, a pneumatic tube system was built for the Post Office in London to convey mail bags in carriages from Euston Station to Eversholt Street post office. A newspaper reporter described it as "trains propelled rapidly backwards and forwards through the tube".

Photgraph of the same train
Image from 'The Street Railway Review', 1891, courtesy of Carnegie Library of Pittsburgh on Flickr NKCR

In 1864, a year after the opening of the Metropolitan Underground Railway which was constructed by cut and cover method, there were over 39 metropolitan railway bills submitted each proposing a new underground railway in London. One of them proposed an underground pneumatic railway along the Thames embankment. In Engineering Facts and Figures for 1864 by Andrew Betts Brown, he referred to "the contract for the tube railway".

This pneumatic railway project did not go ahead, and the cut and cover method of construction continued until the first truly underground railway from King William Street to Stockwell was opened in 1890. It was described as "an engineering triumph" in one newspaper which went onto describe the journey "through the tube under the River Thames". [1]

The word tube referred to the method used in its construction: tunnelling through the earth and placing segments of iron to line the tunnel, creating a cylinder or tube.

The great success of this line led to the Central London Railway opening in June 1900. It was called the "twopenny tube" after its ticket price. This indicates that the Tube must have been in common use before then.

In August 1900, a London newspaper carried the headline: "The 'Tube' and the 'Bus", and discussed the competition between the two. [2]

By 1905, the railway company advertised on its posters the "Central London (Tube) Railway".

It was only natural that following this the whole underground railway system became referred to as the Tube. 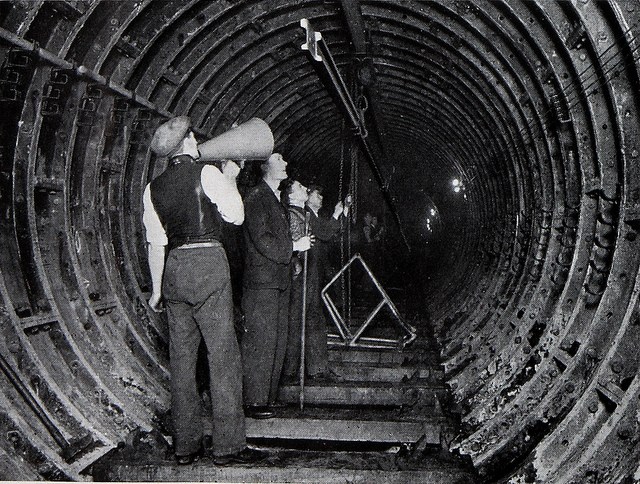 Laying rails in the tube.
Image courtesy of The National Archives on Flickr NKCR