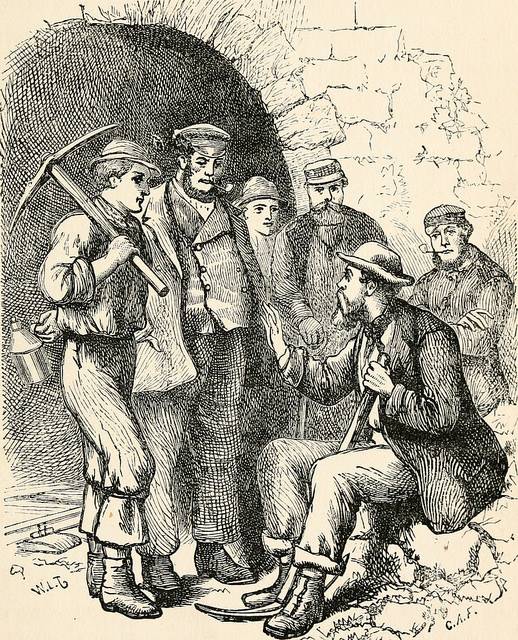 Why the arrival of the railway would create panic in a neighbourhood.

The construction of canals and docks in 18th and 19th century Britain made an important contribution to the industrial revolution. A workforce of thousands of labouring men was required to dig the docks and canals, which were also called navigations. These labouring men became known as Navigators or Navvies for short (sometimes spelt Navies, or later referred to as Bankers).

With the advent of the railways and the railway mania from the 1830s to the 1850s, thousands of miles of railway tracks were laid down across the country with navvies employed in their construction.

Social observers of the time noted the workforce consisted of three types of labourers: labourers from the local district who were out of work; wandering labourers, often from Ireland; and a permanent group of labourers who had been employed in building the canals and railways for years.

Using their own muscles and the simple tools of spades, pick-axes and wheelbarrows, the work was very hard with little assistance from machines. They were rewarded with higher wages, but it was a hard life for hard men. They lived in temporary camps, tents, or lodged in nearby houses; some took their families with them. They had a reputation for drunkenness, immorality, fighting and crime. What would be described today as anti-social behaviour.

The arrival of hundreds of navvies in an area would create fear and panic among many of the locals, especially the middle and upper classes. They feared, as one newspaper reported, they would be descended upon by "reckless, desperate, violent characters, who are restrained by no principle from the commission of crime". [1]

Their living conditions also produce alarm. "The condition of the temporary colonies of navigators is frightful; they live in a kind of promiscuous brutality to which forethought, decorum, or even common decency is truly unknown - both sexes huddled together in the rudest profligacy, dirt and riot." [2]

By the time of mechanisation, the steam crane became known as a 'steam navvy'.
Image from 'The ways of our railways', 1910, courtesy of University of California Libraries. NKCR

The social control of the navvies worried the Victorians. They saw in the navvies a lack of religious observance, alcoholism, diseases, and little schooling of their children. The newspapers and books of the time contain many discussions as to how the police, local magistrates, parishes, churchman and middle-class social reformers should deal with the problem.

Looking back it is difficult to state how anti-social the navvies actually were. But it may be that the fear of them was far greater that what they actually did.

After the railways were built, the term navvy became used to describe a road builder or any other labourer involved in the construction industry, earthworks or excavation.