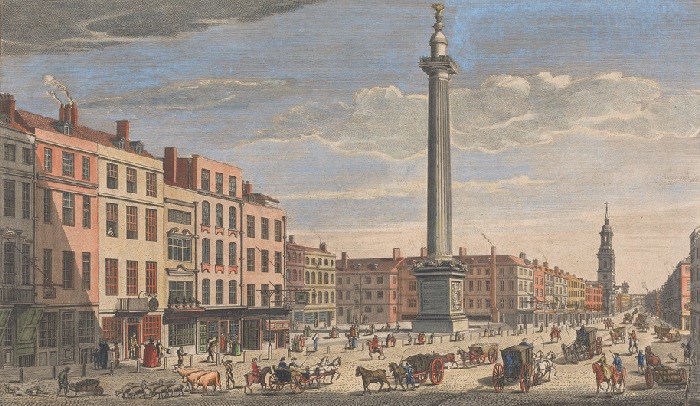 How the memorial to the Great Fire of London was used as a telescope.

In 1666 the devastating Great Fire of London started in a baker's shop in Pudding Lane and went onto destroy thousands of homes, many public buildings and churches including St Paul's Cathedral.

This great fire is commemorated in a Doric column known as 'The Monument'. A climb up the Monument is often on a visitors' itinerary when on a trip to London.

Designed by Sir Christopher Wren and Dr Robert Hooke, it stands at 61 meters tall (202 feet). At its pinnacle is a gilt-bronze urn sculpture of flames. The height of the column is exactly its distance from the where the fire started in Pudding Lane.

Inside the column is a spiral staircase consisting of 345 steps. After climbing 311 steps the public can gain access to a balcony which gives views over the London skyline, although the view is now rather spoilt by taller office blocks. It was not always like this. A print of 1794 shows nearby houses barely reaching up past the base of the column. Then, the view must have been impressive.

An inscription on the north panel of the base tells how damaging the Great Fire was: "89 churches, gates, the Guildhall, public edifices, hospitals, schools, libraries, a great number of blocks of buildings, 13,200 houses, 400 streets. Of the 26 wards, it utterly destroyed 15, and left 8 mutilated and half-burnt. The ashes of the City, covering as many as 436 acres..." 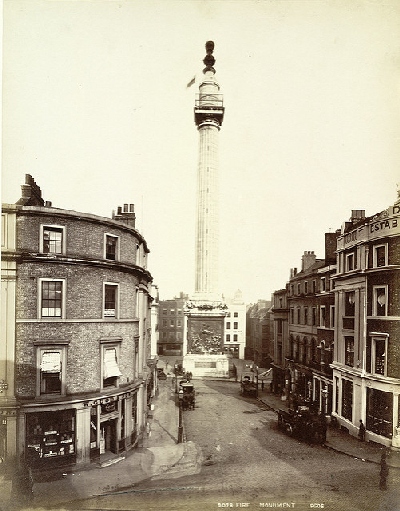 For a short time, the Monument served another purpose. Both Wren and Hooke were keen scientists and members of the Royal Society. Hooke used the column as a zenith telescope. A number of trap doors in the column were opened and the urn at the top was lifted (it was hinged). Lenses were then placed at various heights which permitted various astronomical observations to be carried out. Unfortunately, the column was not stable enough as even minute vibrations interfered with the observations, and its use as a telescope ceased.

The Monument reopened in 2010 following a £4.5 million face-lift.