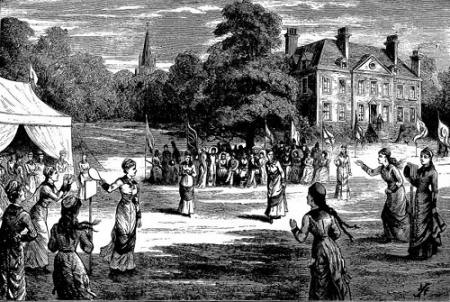 The history of the game of Stoolball.

Stoolball is a bat and ball game now played mainly in the counties of Sussex, Kent and Surrey. It has its origins from at least the 15th century and some argue that cricket is derived from stoolball. It is game for both sexes: both adults and older children. Played outside on the village green during the long summer evenings, as former Sussex inhabitant I remember with great fondness partaking in a game of stoolball.

Like cricket it has eleven players-a-side who play in much the same positions. The wickets are a square board of wood on top of a wooden post or stake. The batter defends the board with a bat shaped rather like an elongated table tennis bat and made of willow. The wickets are sixteen yards apart.

The bowler, and this is what make the game so suitable for all, can only bowl underarm to try and to hit the wicket. The batsman meanwhile has to try and hit the ball and score runs by running between the wickets. There are eight balls an over.

The pitch is smaller than cricket - 90 yards diameter - and does not have to be level, which harks back to its earliest origins when in the 15th century there were complaints of the game being played in churchyards after Sunday service.

The origins of the game, and indeed its name, comes from placing milking stools on the ground and defending them with a hand. The stools were also suspended from trees.

Down in a vale on a summer's day
All the lads and lasses met to be merry,
A match for kisses at stool-ball to play,
And for cakes, and ale, and cider and perry.
Song from 1694

In the following centuries the rules were formalised and the stools replaced with the wickets mounted on posts or stakes. There was a great revival during the First World War when the game was thought suitable for the recuperating wounded soldiers and even a match was placed at Lord's, the home of cricket, in 1917.

The game remained popular until the Second World War when social changes meant a decline in its popularity. There are, however, several teams still playing and more information can be found on Stoolball England.