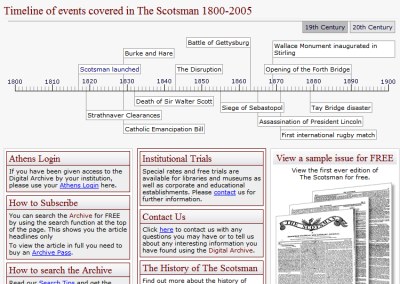 Finding the news about your ancestors.

There are three good sources for you to help you research the Scottish connections in your family tree.

The newspaper is printed in Edinburgh. In this archive each paper provides a broad review of Scottish, British and World news, and most importantly for the family tree researcher, notice of births, deaths and marriages, and local Scottish news items.

Launched in 1817 in Edinburgh on the anniversary of Robert Burns' birthday, the newspaper attacked the establishment with its liberal views. It grew from strength to strength and with the help of the new rail network assisting its distribution. It finally became recognised as the national newspaper of Scotland. It was published at first once a week. Then in 1823, twice a week, until finally in 1859, daily. Throughout the newspaper's history it has always proudly displayed a thistle in the masthead at the top of the paper - and outside its former offices.

The archive can be accessed through institutions by using an Athens password. Some libraries may provide it to members of the public living in their area, or you can pay for unlimited access for 24 hrs, 48 hrs, or longer periods.

The search interface is very easy to use and has a useful FAQs page to help you if you are struggling with your searching techniques.

The The Gazette is the Official Newspaper of Record. A government publication, it was first published in 1699, but subsequent publications were intermittent, until 1793, from when it was continuously published. It is useful source to discover legal matters such as personal insolvency, partnerships, company directorships, and personal legal matters.

The search engine is not so sophisticated as The Scotsman archive, but nevertheless, is still usable, and best of all, it is for free.