How did Scotland Yard get its name? 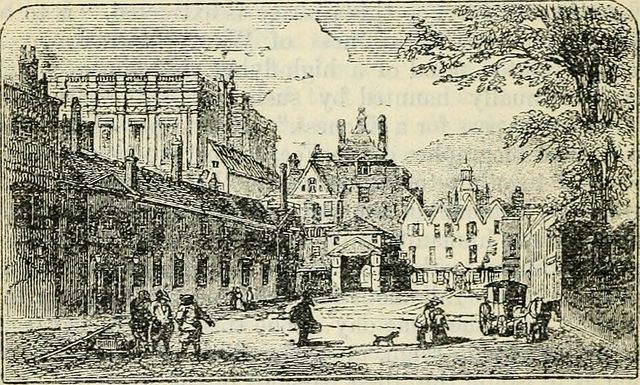 The area of Scotland Yard, c.1750.
Image from 'The town: its memorable characters and events', 1906, courtesy of the University of Toronto on Flickr. NKCR

The origin of the name of the headquarters of the Metropolitan Police in London.

Scotland Yard is the name popularly given to the headquarters of the Metropolitan Police, the police force responsible for policing the majority of Greater London with the exception of the City of London and London's underground and railways. The force headquarters now occupies a building known as New Scotland Yard, in Broadway, SW1. This building was only occupied by the police in 1967, so the name has a much earlier origin.

The name Scotland Yard comes from its very earliest days, soon after the establishment of the police force in London in 1829. The first Metropolitan Police station was opened on 6 October 1829 in a street called Great Scotland Yard and was at the rear of 4 Whitehall Place which served as the office of the two newly appointed police commissioners.

The origin of the name Scotland Yard (both Great and Little) is unknown, but may be named after a former landowner or a connection with the Kings of Scotland. The name was in use by the 17th century. The area can be seen on this 1834 map.

By 1830, The Times newspaper was referring to the police at 'Scotland Yard', and it being the 'home station' of the police and that of the Chief Police Officer [2], and it is clear from other sources of the time that almost from its earliest days the headquarters was known as Scotland Yard.

As the police force expanded and the number of 'peelers' or 'bobbies' increased, new buildings in Great Scotland Yard and Whitehall Place were taken over, but it became clear that this miscellaneous collection of buildings was not suitable for the force.

In 1884 the area was targeted by Irish Republicans with a bomb. There were other targets in London as well including the Underground. 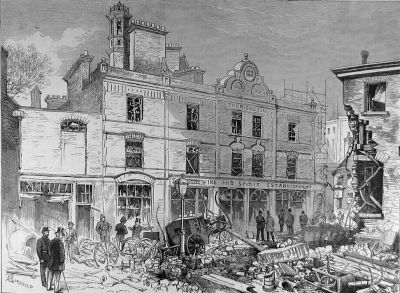 Scotland Yard targeted in a bomb explosion in 1884. Print PD

In 1890 the government purchased a new site for the police headquarters on Victoria Embankment. The new building was designed by Richard Norman Shaw and was the first public building in its entirety to be lit by electricity. [3] This electricity was provided by its own generator, thus freeing it from any interruption to its telegraph and later its 999 emergency system. This building became known as the New Scotland Yard.

When this building in turn became unfit for purpose, the name was transferred to the new building in 1967.