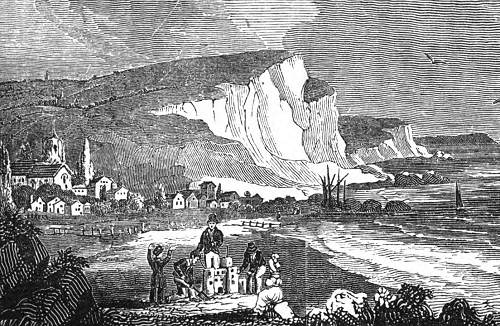 When was the first sand castle built at the seaside?

On a visit to the seaside it is a child's delight to build a sand castle, and it must be said, there are quite a few adults who also enjoy it. It is impossible to say when the first child played the game of trying to stop the tide coming in on a sandy beach by building an embankment of sand or a tower of sand with a moat around it. But the use of the words Sand Castle to describe this activity, as far as we can establish, only came into use in print in the 19th century.

Visiting the seaside began in Britain in the latter part of the 17th century when doctors recommended sea bathing and drinking sea water for all types of medical ailments. Spa resorts such Scarborough began to be popular for sea bathing, and other resorts soon followed, the most well known being Brighton with its famous patron, the Prince Regent, later George IV. However, it was in the 19th century that the seaside became truely the venue for family leisure and recreation.

So when is the first mention of Sand Castle? The Oxford English Dictionary does not help, so we carried out searches of online sources. The earliest reference we found, and incidentally, the first image we could find, is the above image from a children's book titled Conversation of a father with His Children published in 1838. It is an educational and religious book, and in the discussion about a sand castle, the children learn about castle architecture, King Canute, and the Ancient Greeks. The child in the book asks to build the sand castle, so the words must have been well-known by then.

A search of the online British Newspaper Archive produces the earliest reference History House can find at the moment. In the Fife Herald of 24 July 1856, in an article on the positive nature of swimming: "Let him bathe and puddle in the water - let him build sand castles on the beach."

A few days ealier the Banffshire Journal and General Advertiser of 8 July 1856 carried an article which said, "the contrast between the puny, precocious chdd, straining over its books on the crowded benches of a city school, and the chubby frolicsome boy or girl building castles on the sand, or 'castles the air' at the sea side is very marked."

The Elgin Courier of 15 August 1862 has a correspondent confessing that at Margate in summer: "Pleasant it is even to do intensely stupid things - to be upon the beach and pitch pebbles into the sea for half an hour, and then helping to dig a moat round a sand-castle, and almost feeling as much interest it as your little son daughter rising five."

The Liverpool Mercury of 1864 describes the activities on the beach at Llandudno, North Wales, which included sand castle building. Meanwhile on Google News, the Chronicle from Nova Scotia (1868) writes of sand castle, dykes, redans and malakoffs (the last referring to the Crimean War and defense fortifications.)

Sand castle building competitions were firmly established at the seaside resorts by the end of the century, and one newspaper described hundreds of children building "forts and bridges, houses, and lighthouses". 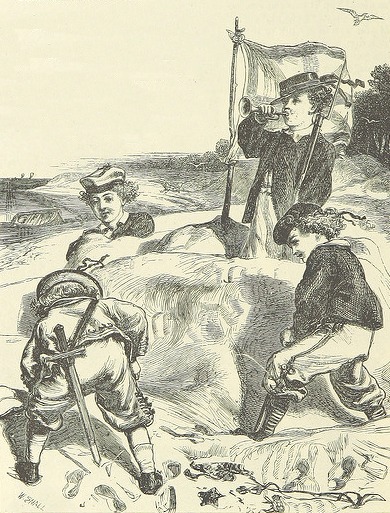 The fun of the seaside in 1885.
Image from 'Illustrated Poems and Songs for Young People', 1885, courtesy of the The British Library on Flickr. NKCR

In 1900 one competition created controversy in the local area. In Rhyl, North Wales, the company of Bovril (a meat extract drink) sponsored a sand castle building completion. Competitors had to include the company's name in the castle. A few days later a whisky company sponsored a similar competition, again their name had to be included. The local temperance society was up in arms as one can imagine.

As more archives come online there may well be discovered earlier references to sand castles.