The last reading of the Riot Act on mainland UK 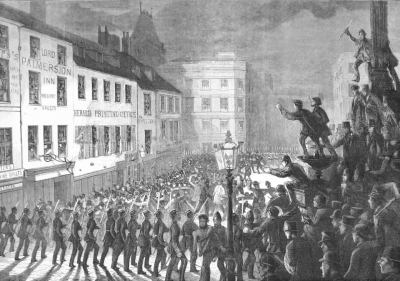 Looks ready for the Riot Act to be read. Print 1874 PD

When a police strike caused a riot.

In 1918 and 1919 the Police twice went on strike in Britain. The second strike was called to start on 1 August 1919. It was not so successful as the first with only a relatively small number of officers taking part across the country.

Although a national strike had failed, the police officers of Liverpool, Bootle and Birkenhead still had a large number of local grievances and many of them supported the strike. The Home Secretary reported to Parliament on 4 August that striker numbers were 932 officers in Liverpool out of an establishment of 2,100, 106 in Birkenhead, and 63 in Bootle.

Over that weekend the authorities in the Liverpool area were very concerned that in the absence of police, civil unrest by criminal elements would break out. A call for help was sent by the Mayor to the Home Office and troops were mobilised in the area; even a battleship and two destroyers were despatched to the port.

The fears were founded. Wholesale looting began on the Saturday night, which left the remaining police on duty and special constables struggling to maintain order.

Shops were smashed and looted and goods strewn about the streets. The Times newspaper correspondent later described the area as the Ypres of Liverpool. The soldiers were called out and with bayonets fixed, they charged the crowd on several occasions. At one time even a volley of shots was discharged over the rioters heads.

The Times reported that in nearby Birkenhead the Riot Act was read out while 40 shops were wrecked and looted, and 700 soldiers assisted the police in attempting to maintain order. [1]

Once the troubles had died down there followed court cases to deal with the trouble makers, none of whom faced the charge of a statutory felony which carried the death penalty for which the Act provided.

The Act was repealed in Britain in 1973.