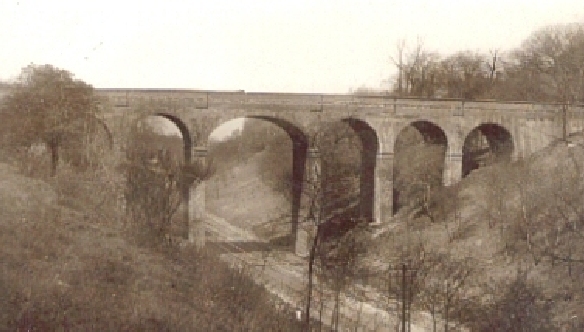 Postcard of the Seven Arches Bridge. The scene of the accident.

In the years following the heady days of railway mania, accidents were still a problem for the railway companies. On Thursday 19 September 1850, at just before 8am, a dreadful accident occurred at Brentwood and nine railway workers were killed. At this time the line was part of the Eastern Counties Railway 'ECR' which was established in 1836. By 1840 the line extended out from London and reached Brentwood. Later it was extended to Colchester.

On the morning of the accident it was very foggy with visibility no more than 40 yards and steadily decreasing. Just by the Seven Arches Bridge on the Brentwood to Shenfield stretch of the ECR, twenty five men were working on track maintenance. Ballast had been brought up the line on a number of trucks and had been tipped out between the two tracks.

The gang were working on the down-track spreading the ballast between the sleepers. The ballast train was stationary on the other track - but as the driver Edward Muirhead later stated, the engine was very noisy. Thomas Coldwell, the foreman of the gang, was aware that a train was due to pass on the down-line yet no look-out had been posted.

Suddenly, looming out of the fog, not less that 50 yards away was a passenger train coming towards them. Thomas Chalk one of the gang shouted out a warning "The train is coming. Get out of the road, chaps", but because of the noise of the ballast engine not all of them heard this. It struck the men and killed nine of them instantly. John Patience was one of the lucky ones. He was struck by the train and knocked unconsciousness. He later recovered consciousness with no serious injuries. 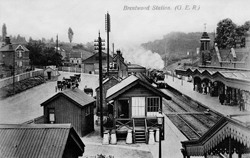 Once the bodies had been recovered, an investigation was mounted and a Coroner's Inquest was held at the Railway Hotel, Brentwood, the following week.

The inquest heard that the driver of the train, John Snowden, had left Ingatestone and once he had reached Shenfield the fog closed down very quickly. Once past Shenfield he drove at 8 - 12 miles an hour. On approaching Seven Arches Bridge he had whistled - which he would normally do as it was on a bend. He suddenly he noticed a group of men standing on the railway track directly in his path. He applied the brakes applied and threw the engine into reverse, but it was too late and he hit the men. Snowdon was an experienced driver. Although he had only been with the ECR for 5 months, he been working for the Maryport - Carlisle line for 9 years.

There was some contradictions in the inquest evidence but it transpired that no telegraphic notice or advance warnings had been given to driver of the ballast works (as was common with other railways).

The Coroner's Jury verdict was Misadventure but they criticised the company and stated that the gang should have been given better protection.