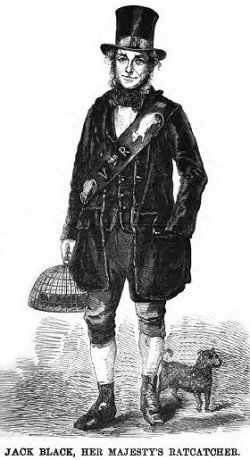 Even Buckingham Palace had rats.

Londoner Jack Black was the self-described "rat and mole destroyer to Her Majesty".

In 1851 Henry Mayhew published London Labour and the London Poor, a ground-breaking examination of the condition and lives of London's poor. Mayhew carried out interviews of the people he came across and in volume III he wrote of the lives of the 'Street-Folk'. One of these was Jack Black, professional rat catcher to Her Majesty Queen Victoria.

Not only did Black destroy the vermin, but he supplied the demand for live rats for use in ratting competitions held in many taverns where terriers fought live rats while their masters bet on their prowess at killing rats.

Black was reported to be "the most fearless handler of rats of any man living", and Mayhew witnessed it himself when at a public display Black placed half a dozen rats taken directly from the sewers inside his shirt while delivering a sales pitch on the rapid effects of rat poison. That he could have been easily bitten on this occasion was proved by the numerous scars on his face and hands, and on his own account that he had been on death's door three times through rat bites. 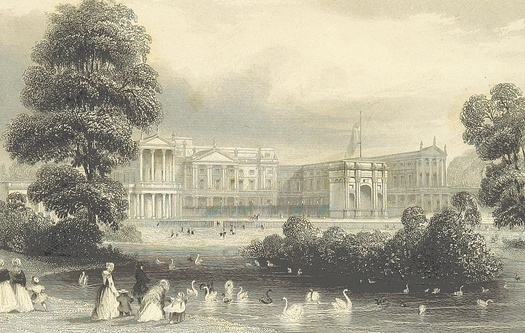 Buckingham Palace around the time Jack Black would have been catching rats.
Image from 'Illustrated London', 1846, courtesy of British Library on Flickr NKCR

He told Mayhew that he had started catching rats at the age 9, and by the early 1840s he was rat catcher for various Government Departments in London which included the Royal Palaces occupied by the Queen.

To advertise his business, he would take to exhibiting in the streets and would wear a costume of white leather breeches, a green coat and scarlet waistcoat, and a gold band round the hat, with a belt across his shoulder.

The interview covers several pages and is an interesting trip into a very different life and time from today.