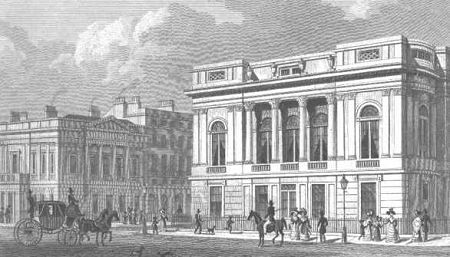 How the London law enforcers carried out raids.

We are very familiar with how today's police forces conduct a raid on the house of a drug supplier, or the venue of some other illegal activity, but how did the authorities conduct a raid in the early 19th century? This is one example.

The "pernicious games" of roulette and the similar game of roly-poly were illegal in England in 1822 (18 Geo. 2. C34.), but the games still flourished. A house on one of the most affluent streets in London, 33 Pall Mall, was the venue of one notorious gambling den. It had already been raided by officers acting under a magistrate's warrant, but they had failed to seize the evidence, their entry having been delayed long enough for the evidence to be disposed off.

The owners of the den now reinforced the premises further. At the entrance of the house was a stout wooden door. On the first floor there was a three inch door fastened on the inside with four heavy bolts and two bars of iron across the door. The gaming area was situated on the second floor, and again this was behind a bulky wooden door. Porters acting as look-outs were posted on the first and ground floors.

A new raid was organised after a disgruntled gambler upset with his losses was ejected from the premises. He went to the Magistrate to lay information that the premises was back in use as a common gambling house. 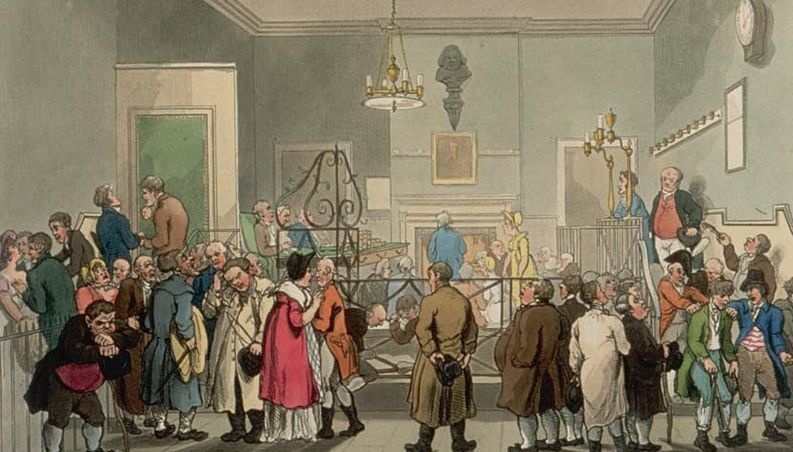 Bow Street Magistrates Court, 1808
Image from 'Microcosm of London', courtesy of the University of Toronto on Flickr NKCR

Within three hours, a number of Bow Street Runners - this was before the advent of the Metropolitan Police - were in place ready to raid the house. It was decided that forcing their way through the front door with sledge hammers would take too long, so a more subtle plan was called for.

A number of the officers made their way to the street and loitered there without raising the suspicions of the porters. Another officer posing as a tradesman carried a ladder pass the house. He then quickly placed the ladder against a first floor window and swiftly scaled the ladder into the house followed some of his colleagues. Taking this route they had by-passed the ground and first floor doors.

The surprise was complete, they found the look-out on the first floor asleep, and despite cries of alarm from the porters on the ground floor, the final door was forced open and fifteen gentlemen gamblers with their equipment were caught red-handed and taken before the Magistrate.

Looking back, there's not really much difference between then and now. Subtlety and surprise are the key to success.