What work did a Nightman carry out? 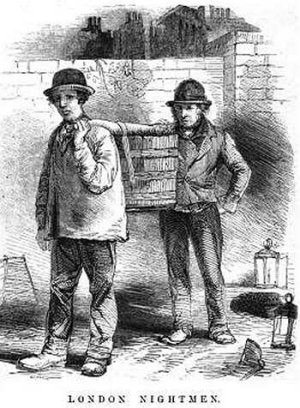 Did your ancestor carry out this disgusting job?

When researching your family history or local history you may come across in census returns and other archived documents references to the job of a Nightman, sometimes also called a night-soil remover or contractor. The work of a Nightman was perhaps one of the worst jobs imaginable: emptying a cesspit containing human excreta, or to be vulgar, shit and urine.

Before the introduction of ceramic flushing toilets and sewers, sanitary conditions in 18th and 19th century British cities were very basic, and in some working class slum areas they were appalling; the breeding grounds of disease which led to high death rates.

The vast majority of people used what were known as Privies. These were often small wooden buildings, shared by many people or even many households. There would be a board with three or four holes cut into it, on which one would sit. Some were without a partition, so there would be no privacy. The smell would be overwhelming, especially in the heat of summer.

The excreta would drop into a chamber pot ready for transfer to a cesspit, or it would fall directly into, or channel away into a cesspit. The cesspit was a specially dug hole to accept the waste. The cesspit could be up to 20 feet deep with an access point at the top covered with flag stones or wood. A well built cesspit could last for several years without having to be emptied.

However, many privies and cesspits were often badly maintained with their contents leaking into the surrounding soil or flowing out into the open. As Samuel Pepys discovered when his neighbours "house of office" had overflowed into his cellar, that he "stepped into a great heap of turds". Some were even dangerous to use.

"There is one privy, which has a cesspool in common with another privy attached to another house. The cesspool is nearly full; the wood-work of the privy can scarcely hold together, and is dangerous to use. Not long ago the landlady of some houses fell into a cesspool and was suffocated."
Sanitary ramblings: being sketches and illustrations of Bethnal Green 1848 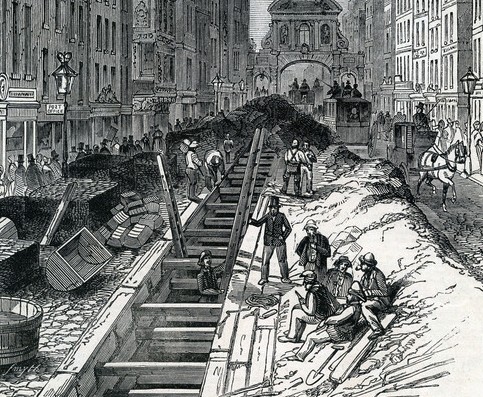 The task of the Nightman was to come and empty these cesspits. As their name implies, they came at night to do this task, and the product they removed was referred to as night-soil. The Nightman would prefer a dry cesspit where the urine had soaked away, but depending on the condition of the cesspit and the water table, this was not always found to be the case.

Henry Mayhew in his great work, London labour and the London poor, described the operation of the Nightman. They would arrive in teams of three or four men with a cart. One man, the 'holeman' went into the cesspit and filled a tub either by immersing it in the night-soil or filling it with a shovel. Then he would scrape or wash off the outside of the tub before the 'rope man' would raise the tub, and the two 'tubmen' would carry the tub, suspended on a pole, to the cart.

The cart would then be taken off to the Nightman's yard where it was mixed with other rubbish that the Nightmen and other scavengers had collected including ashes, dust, dung, and rotting vegetables. There it would be mixed before it was sold to farmers as manure for the fields.

Night-Soil for Manure
A large quantity of NIGHT SOIL to be SOLD, near the Regent's Canal Basin, in the City-road, convenient for land or water carriage. Particulars may be known on application to Mr. J. Clarke, 78, Goswell-street; where also may be had, the Compressed Manures, one hogshead of which is sufficient to dress an Acre of Land.
Advertisement in the Morning Post, Tuesday 25 November 1823, on the British Newspaper Archive

As can be imagined, it was a dangerous and unpopular job. Nightmen were reported to suffer from suffocation from gases, a wide range of illnesses, and even temporary blindness. It is often reported that they were heavy drinkers of gin and beer - perhaps one can understand why this should be so, given the nature of their job!

If your ancestor is shown on the census as a chimney sweep, scavenger, or rubbish collector, then they may also have worked on occasions as a Nightman.