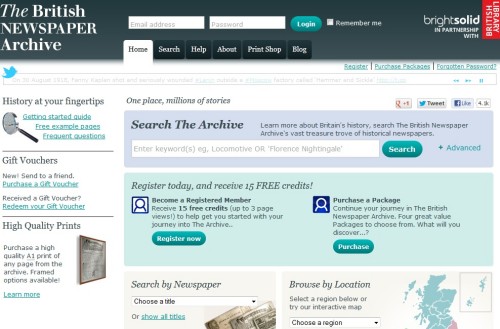 British Newspaper Archive.
One of many newspapers archives in which you could find your ancestors

A look at newspaper archives and how they can help you research your ancestors.

British Library - The primary source for newspaper archives is the British Library Newspapers. The collection is the largest in the UK and consists of British and overseas newspapers, and popular magazines and periodicals. Many are now available through three online sources.

The British Newspaper Archive. Published and manged by DC Thomson Family History Limited. It starts in the 18th century with extensive coverage for the 19th and early 20th centuries. There is even some coverage up to 1999. Hundreds of pages of local and national titles are being added daily. By 2021 the aim is to provide 40 million pages. It is pay-to-view with various viewing packages available and the occasional free access offer. See our article on searching the British Newspaper Archive where an example search is shown.

Alternatively, Findmypast.co.uk which is owned by the same company offer access to the same database for subscribers to their site (subject to the subscription package purchased).

British Newspapers 1800 - 1900. An online collection of 49 local and national titles. This is available from Gale Publishing via universities and other subscribing institutions, or local libraries (Essex libraries included).

For newspaper titles currently not available online or from abroad , visit the British Library help page to find out how to view their collection.

Welsh Newspapers Online from the National Library of Wales allows you to browse and search over 100 titles of pre-1910 newspapers - free of charge. Many of these papers contain English news as well.

Guardian and Observer newspapers. 1821-2000 for the Guardian, and 1791-2000 for the Observer. Pay for 24 hours or longer. This can also be accessed for free through some UK county libraries. Speak to your local librarian.

Daily Mirror archive 1903 - 1980; Daily Express and other publications. Pay for 48 hrs or longer. This can also be accessed for free through some UK county libraries. Speak to your local librarian.

The Times digital archives 1785 - 1985 is operated by Thomson Gale databases and can be accessed through some UK county libraries and universities. Speak to your local librarian (Essex included).

If you are a member of Ancestry.co.uk, they have a searchable text version of the newspaper for the following years: The Times 1788-1833.

The Stage Directory, later The Stage, magazine covering the entertainment and performing arts industry. Online archives 1880 to 2007. Perfect for researching your music hall or theatrical ancestors.

Index to The Builder and The Building News. These published descriptions and illustrations of buildings built during the period from 1842 to 1914. Very good for searching architects or the history of 19 and 20th century buildings.

Newspaperarchive.com is a largely American audience aimed newspaper archive, but with a surprising number of British titles in their archive. Subscription based.

Ancestry.co.uk also have some years of the Illustrated London News, the Penny Magazine, and several regional papers such as Liverpool, Bristol and Edinburgh.

Other titles such as the Telegraph, Daily Mail, the Burnley Collection (18th century titles) are currently only available to subscribing institutions such as universities. Thes archives are provided by a company called Gale Cengage Learning.

A glance at our present-day newspapers immediately reveals the problem with newspapers. They full of mistakes, misquotes, and do not contain all the facts. They are also written with a particular reader in mind and their attitudes. The same applies to 19th century newspapers, so one must bear this in mind when reading them.

Having pointed out the problems, it must be said, however, that newspapers are an excellent source of information for your family tree and they should be included in your research.