Who designed the National Trust's symbol? 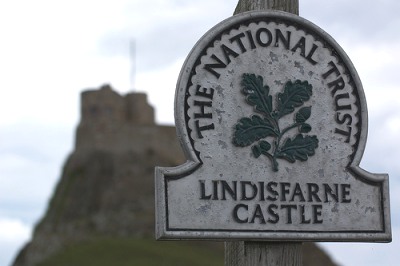 Oak leaves are the logo of the National Trust.

We thought I would look into this, but found nothing to support this assertion.

The symbol came about as a result of a competition announced by the National Trust in 1935. The entrants were asked to design a symbol representing the National Trust which would be suitable for placing on various signs, notice boards and on their stationery. The adaptability of the design for all types of materials and surfaces was most important. A prize of £30 was offered for the winning design. No other criteria was stipulated. [1]

One hundred and nine designs were submitted, but none were thought suitable. It was decided to hold the completion again, but limit it to six designers who would be specially invited to submit their designs. This time they were asked to submit designs based on either an English lion, the rose, or the oak, as these were though to best represent English heritage. [2] [3]

The winning design was by artist Joseph Armitage (1880-1945). His other works included decorated carvings on St George's Chapel, Windsor Castle; the Bank of England, and South Africa House.

We could find nothing to suggest that the Clergy House inspired Armitage, and in The Thirties Society Journal, Edward Armitage wrote of his father's life and career and there is no mention of Alfriston or Clergy House.

It seems therefore, that Armitage was only sticking to the his brief. In 1936, Armitage's design started to appear on signs at National Trust properties.