What was the first National Trust property? 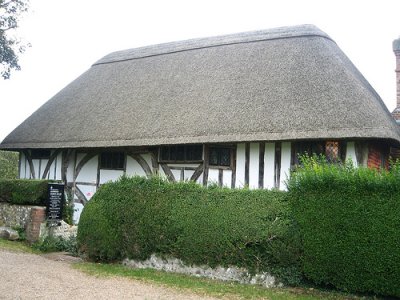 The story of the saving of the Clergy House.

The National Trust safeguards the heritage of England, Wales and Northern Ireland. It has now over 350 historic properties, gardens, and ancient monuments, as well as miles of countryside under its care. National Trust properties are visited by millions of people each year. But what was their first property?

The Trust was founded in 1895 by Sir Robert Humter, Canon Hardwicke Rawnsley and Octavia Hill. Its original name was The National Trust for Places of Historic Interest or Natural Beauty.

The first property bought by the Trust was in Alfriston in 1896. Alfriston is a delightful Sussex village with a narrow main street, with flint, tiled, and timber buildings in the Sussex vernacular; and a 14th century church known as the 'Cathedral of the South Downs'.

Next to the church is a timbered wealden hall also built in the 14th century. It was believed that it was once the home of the church priest during the pre-refomation period. It then becmae a farmer's house until at some time it passed to the ownership of the Church of England. It is now known as the Clergy House.

At the end of the 19th century the Clergy House was in a ruinous state. Some repairs had been made to it after an appeal by the Vicar of Alfriston, but part of the roof had collapsed in a storm and the property was still in a very dilapidated condition. 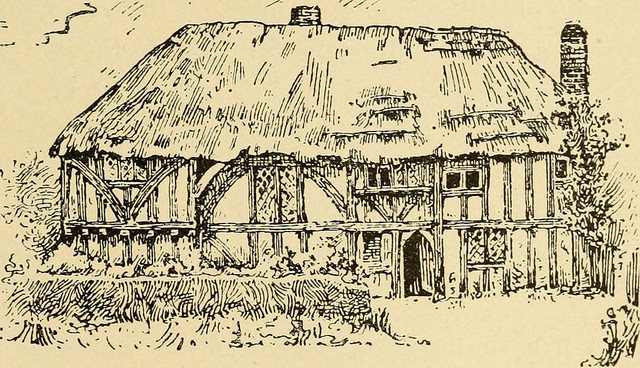 .Drawing of the Clergy House late 19th century
Image from 'Parish priests and their people in the Middle Ages in England', 1898, courtesy of Princeton Theological Seminary Library on Flickr NKCR

The newly formed Trust stepped in recognising that the property was historically important and needed saving. It purchased the property from the Ecclesiastical Commissioners for the nominal sum of just £10. It then immediately launched an appeal to raise £350 to initiate urgent repairs and conservation.

Visitors can now visit Clergy House and see its oak framework in-filled with wattle and daub. There is the central hall 23 ft by 17ft, an open timbered roof, large cambered tie beams and king posts. The floor is made of chalk and sour milk. It was re-thatched in 2005.

It has been said that the Trust's symbol was inspired by a carving of an oak leaf to be found in the Clergy House. This appears to be incorrect, see the article 'Who designed the National Trust's symbol'?