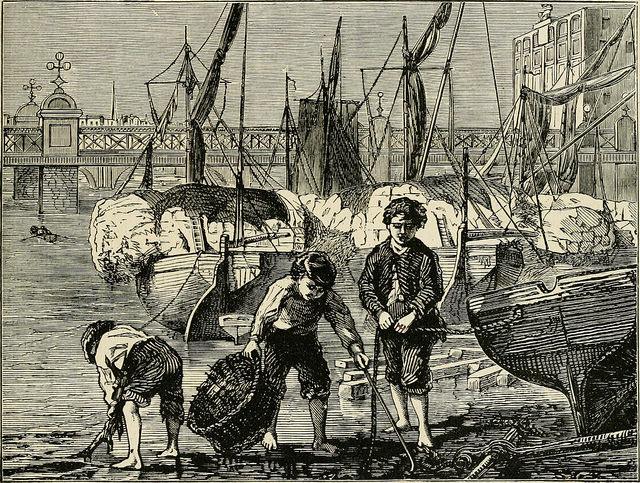 Scavenging on the foreshore to survive.

A Mud-Lark (or Mudlark) was the name given in the 19th century to children and adults who scavenged the banks of the River Thames in London. There were river scavengers in other parts of the country, but it seems the term Mud-Lark was largely used in London. According to the OED, the first mention of the word is from 1796.

During the Victorian period the River Thames was a busy waterway with thousands of boats and ships carrying cargoes and passengers, and with hundreds of wharfs lining its banks. It was also one of the most polluted rivers in the world.

In this filth, the poor and sometimes homeless of both sexes, scavenged and raked through the river mud and where the sewer outlets disgorged their contents into the river. The tide restricted their work to 7 or 8 hours at a time. They worked in all weathers often wading up to their armpits to recover all types of material. They recovered pieces of coal, iron, brick, copper, canvas, and bones, and sold it onto dealers.

The numbers of Mud-Larks are not known, although in one court case in 1839 the police stated there were fourteen Mud-Larks working in their small area. They could earn 20d. to 30d. a day scavenging. [1] 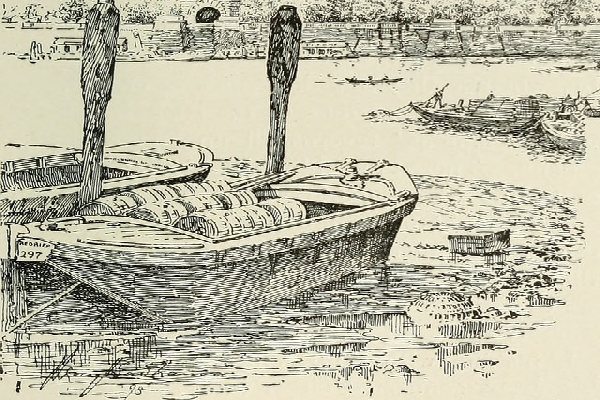 Barges on the Thames foreshore
Image from 'South London' 1912, courtesy of University of California Libraries on Flickr NKCR

The scavengers often broke the law. One notorious and very unpopular female Mud-Lark took scavenging a little too far when she regularly stole coal from barges moored on the river. She dropped the coal into the river mud and smeared it in the mud to make it look as if she had found it on the foreshore. When stopped by the river police and as they tried to arrest her, she would resist and roll around in the mud determined to make them as dirty as she was. [2]

Nowadays, the modern Mud-Lark searches the river bank for objects of historic and archaeological interest.

Both on the British Newspaper Archive