Who was the first British monarch to travel by rail? 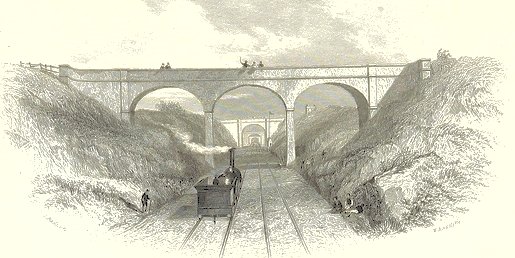 A newly built Victorian railway.
Image from 'The Book of The Grand Junction Railway, being a history and description of the line from Birmingham to Liverpool and Manchester', 1839, courtesy of British Library on Flickr NKCR

On 13 June 1842, Queen Victoria left Windsor Castle to undertake her first train journey. She was no doubt a little nervous, after all, railways were a relatively new technology and their safety record was appalling compared with today's statistics. In 1842, railway accidents in England Scotland and Ireland caused the death of 84 people and injured 102. [1]

Victoria, however, had received comforting assurances from her husband, Prince Albert, who had persuaded to undertake the journey. Prince Albert, who was very keen on the progress of science and industry, had taken his first railway journey on 14 November 1839 when he travelled from Slough to Paddington on the Great Western Railway, and had taken several more journeys since then. Although perhaps a little nervous with its speed, for it is reported that he said on one occasion "Not quite so fast next time, Mr Conductor, if you please." [2]

The Great Western Railway only had two day's notice of the Queen's desire to undertake the journey, so one can image the urgency of the preparations to make things ready for the day. It was also to be undertaken in great secrecy as they did not want crowds lining the embankments or platforms in case of accidents.

On the morning of the historic journey, the royal procession left Windsor Castle and arrived at Slough Station where it was met by the directors of the railway.

The royal carriage was adapted from the standard carriage of the time, but with addition fittings and bouquets of flowers liberally distributed.

The engine was driven by Daniel Gooch, the railway's superintendent locomotive engineer, and accompanied on the footplate by Isambard Kingdom Brunel, the great engineer and builder of the Great Western Railway. The royal coachman also insisted on riding on the footplate, but he later regretted his actions as the smoke and soot ruined his scarlet livery.

View of the line of St. Helen's and Runcorn Gap Railway, crossing the Liverpool and Manchester Railway, 1832.
Image courtesy of Yale Center for British Art PD

The train departed at 12 noon and the journey was undertaken at a sedate speed and took 25 minutes. On arrival at Paddington Station with its specially prepared platform covered by a red carpet, the Queen was greeted by more railway officials and their families, interested onlookers, and a detachment of Hussars and police to control the growing crowds who had heard news of the event. She was then escorted to Buckingham Place.

It would appear the Queen approved of the new way of travelling. She wrote the following day:

"We arrived here yesterday morning [Buckingham Palace], having come by the railroad, from Windsor, in half an hour, free from dust and crowd and heat, and I am quite charmed with it." The Letters of Queen Victoria: A Selection from Her Majesty's Correspondence

Now fully confident of the railway, Queen Victoria went on to regularly use the railways to travel to all parts of her kingdom.