Martello towers of the Essex shore. From defending the Essex coast to a community art centre.

The Essex coast has always been vulnerable to attack from the seaward side. The Napoleonic period was no exception. A line of defensive fortresses known as Martello Towers were built to defend the coastal towns from Napoleon's forces. Some of these can still be seen along the coast, and some have been adapted for more peaceful uses such as the Jaywick Martello Tower which is now a community art centre.

The name Martello is derived from Torre della Mortella, a circular fortress in Corsica which held out to British attack for several days until it was eventually captured. The attackers were so impressed by its defensive capabilities that its design was adopted and adapted. 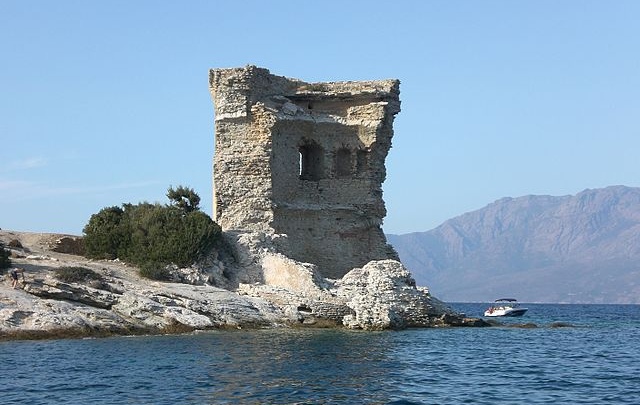 The ruins of the orginal Torre della Mortella in Corsica
Image courtesy of Colle M on wikipedia CC-BY-SA 3.0

The threat of invasion, or at the minimum, coastal naval action by the French navy, prompted the building of a chain of Martello Towers along the south coast; this was to follow with instructions to build a chain of towers along the east coast from Point Clear near St Osyth, to Aldburgh in Suffolk. These were designated with a letter of the alphabet, while the south coast towers were numbered.

The towers were armed with up to three large guns and smaller cannon. The tower at Harwich, said to be the largest, was mounted with ten 24 pounders in 1848. Up to thirty troops occupied the tower and the basement stored ammunition.

The sturdiness of the towers are evidenced by this article from The Times newspaper regarding a recently constructed tower at St Osyth.

"One of the Martello Towers on the coast of Essex near St. Osyth, has given way. Its first inclination was several feet one way; in order to restore it to its situation, the ground was excavated on the other side, and it has not gone back with an inclination in nearly the same proportion the other way. What is very singular, though the fabric must have sustained a great deal of percussion, no crack or fissure appears in the brickwork."
the Times February 11, 1811

Today, out of the Essex towers A to K, only A,C,D,E,F and K remain standing.

Some of these are unused and abandoned, but three have been adapted for other uses.

Exterior of the Jaywick Martello Tower before renovation
Image courtesy of Coast Art.

The Jaywick Martello Tower was opened in September 2005 as a digital arts centre it now functions as a an arts, heritage and community venue.

Photographs of other Essex towers and additional information available below: