What would you find in Madame Tussaud's in the 19th century? 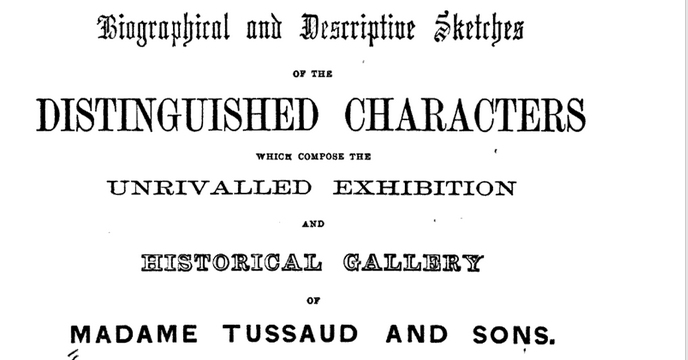 A look at the famous waxworks in London.

Madame Tussaud's in London, is world-famous for its waxworks of politicians, movie stars, musicians, television celebrities, and sports stars. But what would you have seen in their exhibitions in the 19th century?

Madame Marie Tussaud came to Britain from France in 1802 and travelled around the country with her exhibition of effigies of royalty and revolutionaries involved in the French Revolution, with paintings and other exhibits to accompany them. After her death in 1850, her family took over the business.

As the collection expanded it came to be seen as an exhibition of current events, both in Britain and abroad, with figures of leading statesmen and politicians, royalty, and in the Chamber of Horrors, murderers and other notorious criminals. Today we forget that in the absence of television and images dominating the news media, that apart from drawings in newspapers, this was the only opportunity for most people see what famous people looked like.

For the cost of six-pence admission in 1867, in a walk around Tussaud's in the Baker Street Bazaar you could see just over 300 effigies of famous people including the royalty of Europe and politicians, both historical and present day, including Queen Victoria and Prince Albert and other members of the Royal family; Alexander Emperor of Russia, Louis XVI and Marie Antoinette, Maximilian, Emperor of Mexico, Garibaldi, Count Bismarck, and Presidents Lincoln and Johnson.

There were effigies of all the Kings and Queens of England with various portraits and exhibits, and George IV resplendent in his coronation robes with copies of the monarch's regalia including the crown and sceptre, and orb.

In another part of the exhibition there are effigies and relics of the lives of Duke of Wellington, Lord Nelson and Napoleon Bonaparte, including furniture, clothing and portraits.

The full catalogue can be found in 'Biographical and Descriptive Sketches of the Distinguished Characters which Compose the Unrivalled Exhibition and Historical Gallery of Madame Tussaud and Sons' dated 1866 on Google Books.

In the Chamber Of Horrors, which incidentally was the name given to it by Punch Magazine, you would find portraits and exhibits about notorious and sensational murderers including Frederick Manning and his wife Marian Manning - they murdered her lover; Martin Dumollard and his wife - they murdered young girls and sold their clothes and jewellery; James Greenacre and Sarah Gale - he murdered his lover, and aided by Gale, cut up the body; and Burke and Hare, the famous body snatchers.

Also on display are the death masks of people made after they had been guillotined, and a knife and lunette (part of a guillotine) used during the execution of over 22,000 people during the French Revolution; and effigies of Edward Oxford and John Francis who tried to assassinate Queen Victoria. 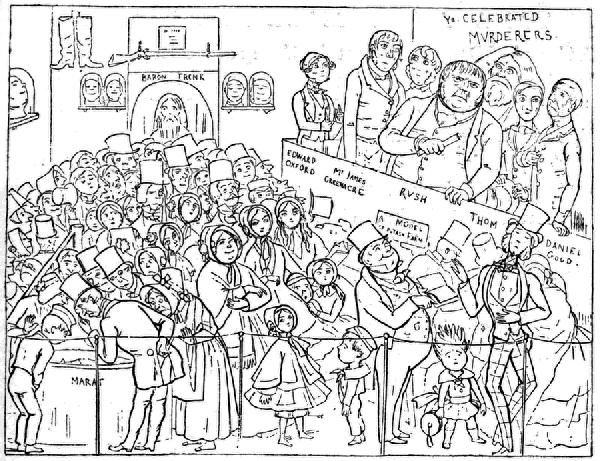 A visit to the Chamber of Horrors.
Image from 'Manners & Cvstoms of ye Englyshe' by Richard Doyle, 1849, on Gutenberg.org

Not everyone found this room to their taste, as one female visitor of genteel disposition wrote "... the contemplation of these gentlemen could not be productive of anything but horror, I thought it a pity to destroy the very pleasing impression which was left by the more interesting exhibition in the large saloon, so I passed then over." From 'Letters from a lady in london to her niece in the country',Chambers Edinburgh Journal 1843

Some of the items from the French Revolution can still be seen today in Madame Tussaud's.