Who first said 'Lead on Macduff'? 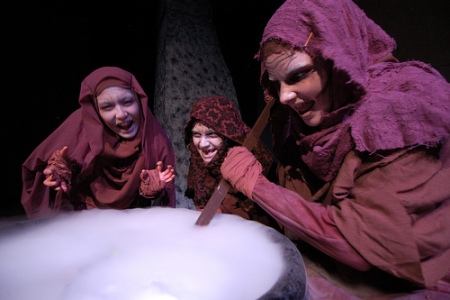 Lay or Lead? The witches will know.
Image courtesy of Jeff Hitchcock on Flickr CC-BY

Using archives to track down the misquote.

'Lead on Macduff' is an invitation for someone to take the lead and that you will follow on. But as any keen Shakespearian or wordsmith will tell you, this is a misquotation from Shakespeare's Macbeth, Act 5, Scene 8.

The phrase should be 'lay on' which means to make a vigorous attack. The words are spoken by Macbeth to Macduff. They are in battle and Macduff challenges Macbeth to yield. Macbeth refuses, declaring:

I will not yield,
To kiss the ground before young Malcolm's feet,
And to be baited with the rabble's curse.
Though Birnam wood be come to Dunsinane,
And thou opposed, being of no woman born,
Yet I will try the last. Before my body
I throw my warlike shield. Lay on, Macduff,
And damn'd be him that first cries, 'Hold, enough!'

So when and how did this misquotation come about? This is challenging question and unlikely to be answered for misquotations often arise through ignorance or mishearing.

Eric Partridge's 'Dictionary of Catch Phrases' places it to the late 19c - early 20c., with an example quote from 1912.

However, with the advent of online sources, History House can now antedate that. These are examples going back in time:

In 1898, a drunk was arrested in London misquoting the phrase. He was fined 7s., in default ten days imprisonment.

Joseph Callaway, sixty four, was charged with being disorderly. The other night the prisoner stood in Villiers Street, Strand, and exclaimed in tragic tones, "Lead on Macduff, lead on! I'm the only real and genuine Sir Henry Irving. Lead on Macduff, lead on! The prisoner had a stick in his hand, and waved it about so energetically that several people narrowly escaped being struck.
Saturday 12 February 1898, Nottinghamshire Guardian, and Saturday 19 February 1898, Illustrated Police News. on the British Newspaper Archive

In King Solomon's Mines by H. Rider Haggard, (1885), when told to be prepared to enter the Place of Death, Captain Good tells Gagool, "Lead on MacDuff".

In Punch of 1867, the narrator in conversation with Punch extols him to tell of the reason for his visit with the words: "That's the style. Lead on Macduff!"
Country Words: a north of England magazine of literature, science, and art quoting Punch.

The earliest mention of the misquote found so far was an attempt to quote the lines direct from Shakespeare. It ocurred at a political rally in Lincolnshire in 1855 on the subject of administrative reform of various government ministries in London. The cumination of one speech was a calling for action: "Lead on Macduff, and damn'd be him that first cries, Hold, enough."
Lincolnshire Chronicle 25 May 1855 on the British Newspaper Archive

So if you are apt to use this phrase and are corrected by a wordsmith, you can tell them that although it may be a misquotation, it's been around for at least 160 years.