In which order were the main railway stations in London built?

A look at the railway stations of London.

In the Victorian period competing railway companies built a number of railway stations in London. Since then all the stations have undergone substantial redevelopment, but many still retain some of their original architectural features including impressive roof spans.

London Bridge - Opened in 1836, London Bridge was first station to be built. Situated on the south bank of the Thames by London Bridge, it was immediately added to and then rebuilt. Trains served south London, Kent and Sussex.

Euston - Opened in 1837 and extended soon after by the London and Birmingham Railway and then the London and North Western Railway. Served Birmingham, north western England, and beyond. Originally designed in the style of Classical architecture, the station has undergone considerable redevelopment and little remains of the original station. Name comes from the then local landowners, the Fitzroy family and their country home, Euston Hall.

Entrance to the London and Birmingham Railway Station c.1839
Image from 'Rides on Railways' by Samuel Sidney, 1851 on Gutenberg.org 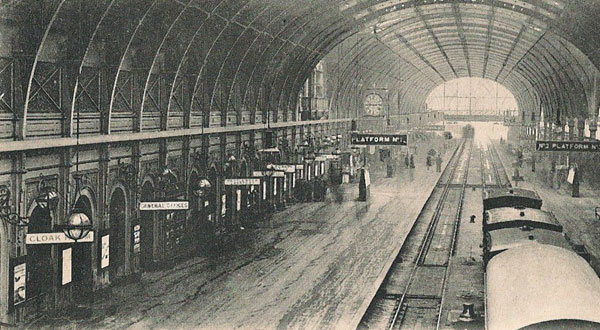 Fenchurch Street - First station to be built in the City in 1841 for the London and Blackwall Railway. Built in the Minories, it was later rebuilt in 1854 in its current location in Fenchurch Street. Served trains to Blackwall, Tilbury and Southend in Essex.

Waterloo - Opened in 1848 with several later additions creating a confusing hotch-potch of platforms and buldings. Later rebuilt. Named after the nearby Waterloo Bridge. Served south western London and counties.

King's Cross - Opened in 1852 for the Great Northern Railway serving the main east coast route to Peterborough,York, and beyond. Named after a monument to George IV which was erected nearby.

Victoria - Built in 1860 and named after Queen Victoria, the station was split in two sections and was shared by four train companies serving Kent and Sussex.

Cannon Street - Built in the City in 1866 for the South Eastern Railway serving south east London, Kent and East Sussex. Named after the street where it is sited.

Charing Cross - Opened in 1864 on The Strand as a link to extend services on from London Bridge.

St Pancras - Built in 1866. In its time it had the largest single span roof in the world. The architecture gothic gem of the Midland Great Hotel was built next to it. Named after the area in which it is sited. Served trains to the Midlands and East Yorkshire.

Liverpool Street - Situated on the east of the City of London and replacing an earlier Shoreditch Station. Opened in 1875 by the Great Eastern Railway which served Essex, and East Anglia. Named after the street where it is located. 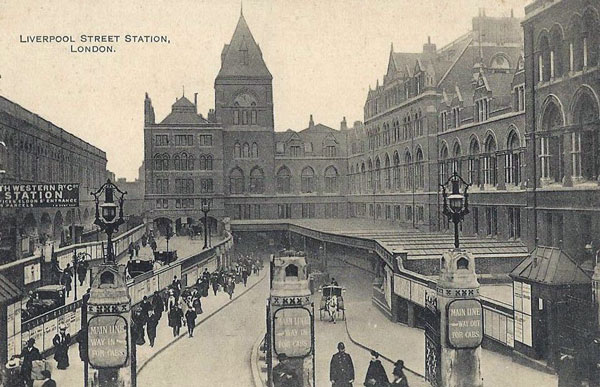 Blackfriars - Originally called St Paul's it was opened in 1886 to serve commuters from south London to the City. Named after the nearby St Paul's Cathedral and then the area in which it is located.

Marylebone - Built in 1899 off the Marylebone Road. One of the smaller London stations it served Aylesbury and beyond to Manchester.