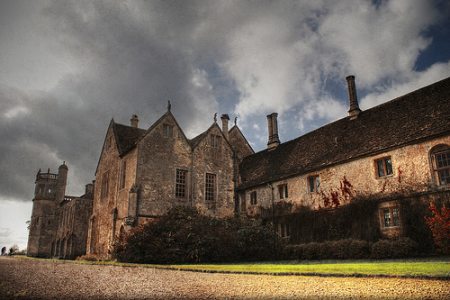 Why the historic village of Lacock is so popular with film makers.

The Harry Potter films, Pride and Prejudice, Moll Flanders, Larkrise to Candleford, Cranford, Moonraker, and Emma, are among the films and television historical dramas that have been filmed at the Wiltshire village of Lacock and the nearby Lacock Abbey.

The village is almost entirely owned by the National Trust and there has been little new building in the village since the late 19th century. The village is delightfully picturesque and contains many historic buildings, few of which have been altered on their exterior since they were built.

The buildings include a medieval church, a tithe barn, 15th century pubs, and houses built in various styles with wood, Costwold stone and brick. Over 200 buildings are listed as protected. The village was founded and built around the wool trade and there are many houses which display the wealth of the inhabitants.

The streets are laid out in a square so this makes it easy to explore. There are few street lights and if you can blank out the residents cars, it is easy to imagine what the street may have looked like in past centuries. That's why it is so popular with film makers: dress the actors up in period costume, cover up 21st century signs, put down some earth to cover the tarmac, and you have a ready-made film set. Take a trip around the village on Google Street view. This starts at the High Street.

Immediately to the east of the village lies Lacock Abbey used for the Harry Potter films of the Philosopher's Stone and Chamber of Secrets. Its medieval cloisters, chapter house and sacristy were used the films.

The Abbey, also owned by the National Trust, was founded in 1299 by the Augustinians. After Henry VIII's dissolution of the monasteries, it was converted into a country house. In the 18th century, Romantic and Gothic additions were made to the house, and it was later occupied by William Henry Fox Talbot, the photographic pioneer who invented the negative/positive process. The first negative photograph was taken here in 1839.

Lacock is now firmly established on the film buff's list of places to visit.