What was the King's Evil? 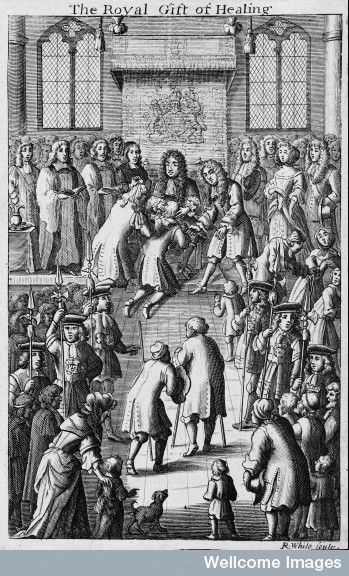 When touching a monarch was believed to be a cure for illness.

The King's Evil was the name given to scrofula, the swelling of the bones and lymphatic glands in the neck. Now recognised to be tuberculosis.

From the time of Edward the Confessor, King of England 1003-1066, it was a superstitious belief that the disease could be cured by royal touch. This belief of the curing touch of a monarch was to be found only in Britain and France.

Succeeding Kings and Queens would hold ceremonies known as 'Touching for the King's Evil' where hundreds of people suffering from the disease would kneel before them and be touched by the monarch's hand. The ceremonies varied between the two countries. Some monarchs were hesitant to carry out the ceremony when plague and other diseases where ravaging the country, but they also realised the importance of the ceremony for the people and recognised that it could make them unpopular if they did not hold the ceremony.

However, not all held the popular belief in the ceremony. James I of England believed it to be superstition, and during the Commonwealth period after the execution of Charles I, Parliament naturally thought it superstitious.

On the restoration of the monarchy and its traditions, King Charles II restarted the ceremony. During his reign touched almost 100,000 people. On 6 July 1660 one of the ceremonies was witnessed by the diarist Evelyn.

"His Majesty sitting under his state [canopy] in the Banqueting-House, the chirurgeons [surgeons] caused the sick to be brought or led, up to the throne, where they kneeling, the King strokes their faces or cheeks with both his hands at once, at which instant a chaplain in his formalities says, 'He put his hands upon them, and he healed them.'" This is said to every one in particular. When they have been all touched, they come up again in the same order, and the other chaplain kneeling, and having angel [coin] gold strung on white ribbon on his arm, delivers them one by one to his Majesty, who puts them about the necks of the touched as they pass, while the first chaplain repeats, "That is the true light who came into the world."
The ceremony concluded with a reading from the bible, prayers and a blessing. Then the King's hands were washed.

Samuel Pepys, the great diarist, witnessed the ceremony a few months later on 13th April 1661. He wrote, "I went to the Banquethouse, and there saw the King heal, the first time that ever I saw him do it; which he did with great gravity, and it seemed to me to be an ugly office and a simple one."

In 1712 Queen Anne touched a 2 year old boy. This was Samuel Johnson who later became famous for his dictionary.

The practice in Britain stopped after Queen Anne, but continued in France until 1825.