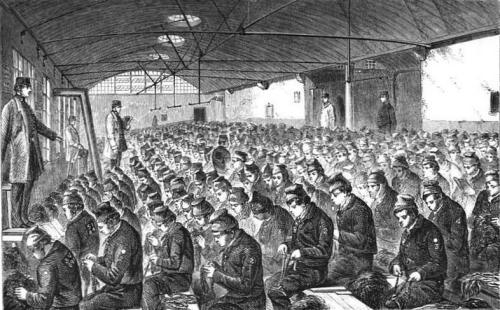 Picking oakum at the House of Correction.
Image from 'The criminal prisons of London, and scenes of prison life' by Henry Mayhew - PD 1862.

How your workhouse and criminal ancestors picked oakum.

If you have ancestors who were in prison or in a workhouse during the 18th and 19th centuries, then they may well have been employed at junk and oakum picking.

Junk was the name given to old ropes and cables once used on ships. These were cut up and then finely picked into fibres to create oakum. Oakum was then mixed with tar or grease and used as caulking to fill in the gaps between the wooden planks of ships to make them watertight.

Picking oakum was used as a punishment in prison, and in workhouses as a way of able-bodied inmates earning their board and lodging.

Prisoners serving hard labour would cut the rope into two foot lengths and then strike it with a heavy mallet to remove the very hard tar in which it was coated. Once this was done, it was passed to prisoners who were serving a lesser sentence: men, women and children. They then had to uncoil, unravel, unpick, and shred the rope into fibres.

The work was monotonous, unpleasant, and created sores on blackened fingers. The rope was held in place by a iron hook held between their knees as they worked. Sometimes they would use an iron nail or spike, or a piece of tin or knife to work on the fibres, but fingers were found to be the best.

In 1824 at one prison there was a complaint by the authorities that picking oakum was too easy. Punishment by the treadmill should be preferred to oakum picking. It was argued that 'the former had a physical and moral effect, while the latter sedentary work which gave opportunities for ideal and immoral conversation'; and in 1823 at the Halstead County Bridewell, it was reported that "the prisoners have hitherto been employed in untwisting and picking oakum, but a tread mill is now erecting."

But as can be seen from the image at the House of Correction, Coldbath Fields, London, in 1862, the chance of immoral conversation was very limited under the watchful eyes of the warders. If they did glance up, then the prisoners would have seen on the walls biblical verses such as 'Go to the ant, thou sluggard; consider her ways, and be wise' and 'Godliness with contentment is a great gain'. [1] 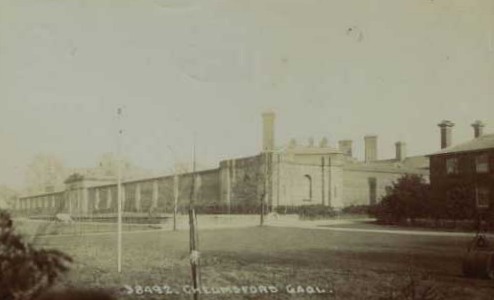 Some prisons stopped oakum picking entirely, swapping it for the treadmill or solitary cells, while others still enforeced it, particularly for women.

After the Poor Act of 1834, workhouses began to employ their inmates at oakum picking to pay for their food and lodging. Often very elderly people with their arthritic fingers were forced to work at the oakum. At the Braintree Workhouse each person "had to pick ½1/2lb of oakum in return for the ½lb of bread in the morning, which is refused in case the person refuses to do the work." [2]

In some dockside areas, entire families of oakum pickers bought the old rope from marine store dealers at 1½d. per pound and sold it back at 2d. per pound. Labouring for 10 or 12 hours a day they could unpick 12 or 14 pounds of rope making 6d or 7d. A very poor income for the work involved.

The introduction of iron ships meant the demand for oakum declined, and this, with more enlightened attitudes to punishment and looking after the poor, meant the practice of oakum picking was dropped from the workhouse and prison régimes.

[1] The criminal prisons of London, and scenes of prison life by Henry Mayhew
[2] Accounts and papers of the House of Commons, 1864, on Google Books