When was the Jigsaw Craze? 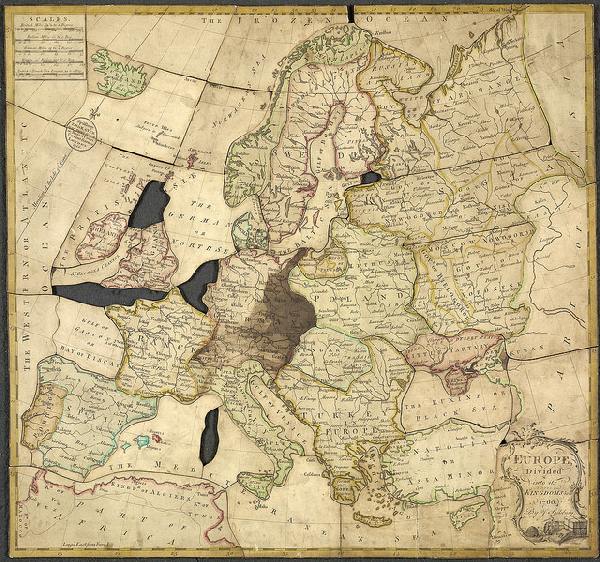 Europe divided into its kingdoms. A jigsaw by John Spilsbury, 1766.
Image courtesy of British Library on Flickr NKCR.

When the world went mad over the humble jigsaw puzzle.

It is generally thought that the first jigsaws were created in the mid-18th century for educational purposes. One of the first commercial jigsaws was made by John Spilsbury in 1766. Spilsbury was a geographer who designed maps in the form of a jigsaw for use as a teaching aid. A close up of the above map can be seen on the British Library's website. It was known as a dissected map.

The word jig-saw, or jigsaw as it is now more commonly spelt, did not appear until the late 19th century after the invention of a type of saw for cutting wood known as a jig-saw or fret-saw in Britain.

During the 19th century, dissected puzzles could be found in the children's nursery, mainly for education purposes, but at the turn of the century, with its catchy new name, jigsaw puzzles became popular among the adults and by 1908 a jigsaw craze had started in the United States which quickly spread across the Atlantic to Britain, and then around the world.

It's not clear where the fad started, but one newspaper report said it was in Newport, and then spread to New York and Boston. Adults were sucked into the craze and it was said that society had become "slaves to its fascination". The puzzles appealed to both the young and the old, and all classes.

The puzzles were made by pasting a picture onto a piece of wood or stiff cardboard and then cutting them up into oddly shaped pieces with a jigsaw. The puzzles were cut into simple shapes without interlocking pieces - these were to come later.

Large commercially made jig-saws were expensive. A 500 piece jigsaw several feet in length would cost between $5-$10. Ideal for country-house parties where the billiard table was a perfect place to set out the jigsaw. They were also found in hotels and on ocean liners where it was thought they would even replace Bridge as a pastime.

At the cheaper end of the market, enterprising women at home sought out pictures by cutting them from magazines, pasted them onto wood or cardboard, had them cut up and then sold them. 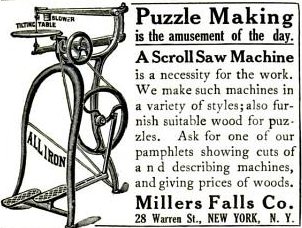 To cater for the demand machines for creating your own puzzles were advertised. Image PD.

Jigsaws puzzle parties were to found in homes, social clubs and church halls. Several copies of the same puzzles were given to teams who raced to complete them. There were even Puzzle Exchanges opened where for 25c you could swap a completed puzzle for a new one providing it contain the same number of pieces.

Newspapers latched onto the craze by having jigsaw competitions. They printed a photograph cut into pieces and invited readers to cut them out, paste the completed puzzle onto a card and return it by post. Jigsaw puzzle competitions were held in shop windows with the public looking on, and manufacturers and shops gave away free jigsaws with their products.

There were picture postcards printed with perforated lines on, write on the back of the card, cut it up, and post off in an envelope to your family or friends.

The effect on socialising was noted by one gossip columnist who wrote "we've all caught the germ, and it only remained for the man who invented the puzzle picture of different coloured woods to drive us all to padded cells" [1]

Jigsaws were set to be part of family life for decades to come.