For how long has the word 'Jackboot' been used to mean oppression? 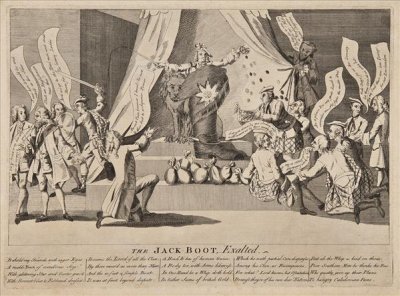 A look back at the origin of the word.

A jackboot (or jack boot) is a boot worn by the military. It rises to mid-calf or up to the knee, no laces, and often with nails on the soles, or irons on the heels. They have been worn by the military from several countries for at least four hundred years. They are most commonly associated with the German army from World War II and the cold-war Soviet army.

Most people think that this use of jackboot originates from the Second World War and Nazism. Surprisingly, its use is much earlier.

The earliest citing from the Oxford English Dictionary 'OED' is from 1768.

"Some insults were offer'd to some of the Lords & Commons in their Coaches as they went down with a Cry of Wilkes & Liberty & no Jack Boot."

However, this may not be all that it seems. This was shouted during a demonstration in London following the ordering of the burning of the North Briton, a newspaper published by John Wilkes, a politician, who in print had attacked a speech by the King, said to have been written by the former Prime Minister, Lord Bute.

The use of jackboot on this occasion is said to be 'a rough pun' on the name of the Lord Bute. A jackboot was cast into a bonfire during the demonstration to ridicule him. See Littell's Living Age. The cartoon above also shows other references to the use of the pun in contemporary newspapers.

The next use offered by the OED is from 1910. So I thought I would try and find some other references between these dates. This was not an exhaustive search, but it does show that the word with its oppresion meaning was in use during the 19th century.

On a report of the Atrocities of Austria on the Ticinese.
"..which offers Freedom the alternative of being stifled with the frock of the priest or crushed beneath the jackboot of the oppressor."
Lloyd's Weekly Newspaper (London, England), Sunday, April 3, 1853;

"Or rather, to speak by the book, this was one of the disputes with France which the new rapprochement brought about by the German Jackboot policy in Armenia and the Transvaal had forced upon Lord Salibury"
The Leeds Mercury (Leeds, England), Wednesday, January 15, 1896;