Where did the name 'Jack the Ripper' come from? 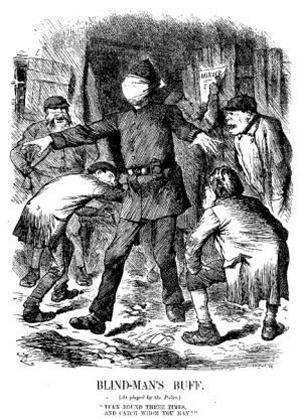 Blind-Man's Buff. Punch magazine criticises police for their failure to catch the murderer who would soon be known as Jack the Ripper.
Image from Punch Magazine 22nd September 1888, courtesy of British Library on Flickr. NKCR

The origin of the murderer's nickname.

The murders of six prostitutes in London's east end between August and November 1888 are known to everyone as the 'Jack the Ripper' murders. Each of the women was brutally attacked, murdered, and some had their bodies mutilated. The murders were committed within a small area of streets and alleys.

The failure of the police to catch the murderer and the brutality of the murders created alarm in the general public. This was fuelled by the newspaper coverage of the time.

But where did the name 'Jack the Ripper' come from? On 27 September 1888, the Central News Agency received a letter written in red ink addressed to "Dear boss". The writer boasted of their exploits in the murders. It was signed 'Jack the Ripper' with a postscript of "Don't mind me giving the trade name".

AN EXTRAORDINARY LETTER.
The Murder Foreshadowed.
The Central News says: On Thursday last the following letter, bearing the E.C. post mark and directed in red ink, was delivered to this agency 25th Sept., 1888.

"Dear Boss, - I keep on hearing the police have caught me, but they won't fix me just yet. I have laughed when they work so clever, and talk about being on the right track. The joke about Leather Apron gave me real fits. I am down on whores; I shan't quit ripping them till I do get buckled. Grand work the last job was. I gave the lady no time to squeal. How can they catch me now? I love my work, and want to start again. You will soon hear of me with my funny little games. I saved some of the proper red stuff in a gingerbeer bottle over the last job to write with, but it went thick and I can't use it. Red ink is fit enough, I hope. Ha! Ha! The next job I do I shall clip the ladies' ears off and send to the police officers just for jolly, wouldn't you? Keep this letter back till I do a bit more work, then give it out straight. My knife's so nice and sharp, I want to get a chance. Good luck.
Yours truly,
JACK THE RIPPER.
'Don't mind me giving the trade name. Wasn't good enough to post this before I got all the red ink off my hands, curse it. No luck yet. They say I am a doctor, Now ha! laugh ha! laugh.
South Wales Echo - Monday 01 October 1888 (and many other publications) on the British Newspaper Archive

This was followed up by a postcard on 1 October, again sent to the Central News Agency making reference to the earlier letter. Again signed 'Jack the Ripper'.

At first it was thought they were practical jokes, but reference in the first letter to cutting off ears and the posting of the letters within a short time of the latest murder suggested to the police the letters could have been written by the murderer. Their contents were revealed to the newspapers in the hope that the public would respond with information. This resulted in wide publicity of the contents of letters and the name 'Jack the Ripper' became immediately infamous.

Within days the phrase 'Jack the Ripper' was in use in popular speech, even used by children in their games, and the newspapers found it a useful label when referring to the murders, or even later murders which were equally brutal but unconnected with the original East End murders.

For the next months and even years the police received hundreds of letters and postcards signed 'Jack the Ripper', and graffiti was found on walls signed in the same name.

There is now a fascination with everything 'Jack the Ripper', and despite the fact that it is thought the two letters were indeed hoaxes, framed facsimiles of the letters can be purchased.